At the meeting, head of the MAUR Bui Xuan Cuong said that currently it is focusing on four groups of solutions comprising compensation and resettlement, technical infrastructure removal, contractor selection and financial arrangement for the project. He underlined the need of synchronous implementation in compensation, assistance and resettlement which must be done one step ahead to prevent site clearance problem from hindering the project like Ben Thanh-Suoi Tien metro line.
According to the MAUR, it is expected that District 1 will basically complete compensation payment and hande over 60-70 percent site for the project by June 30, District 10 will basically finish it and first hand over public land cases. Meantime, District 12 has accomplished the compensation and ground handover. Tan Binh District has completed ground handover for two stations of the metro line namely S10 and S11 while site clearance for the remaining stations in the district has reached 50 percent. Tan Phu District has basically paid damages to affected households and delivered 50 percent site. District 3 has completed its new compensation plan and receive 33 percent ground handover.
Relating to capital for damages payment, there are two groups with the first being the total investment funds for six compensation projects in 2020 which has been arranged under the first phase totaling VND2,385 billion (US$102.18 million). Six relevant districts are affordable for this amount.
Still these six compensation projects are now in need of the additional capital of about VND500 billion ($21.43 million). It should be arranged enough for districts to ensure payment to residents. The total amount of money for site clearance and compensation of the second metro line project is VND4,353 billion ($186.51 million). Hence it needs a supplementation of VND2 trillion ($85.69 million) for this task.
There are no problems in the policy framework for the entire project covering resettlement, except some data which should be updated regularly on ground clearance and compensation. Relating to construction licensing in the corridor of the urban railway, there is a draft report by the city People’s Committee and the boundary and scope of the project have been determined according to Decree 56.
However, the problem is that it is unclear about the competent licensing agency and the regulation requiring residents to get opinions from the MAUR while submitting their construction permit applications.
Stating at the conference, Mr. Tran Luu Quang said that site clearance plays a very important role deciding whether the project’s implementation will be continued in the upcoming time. A clean land fund permits the project to convince relevant sides to refinance it. However it has been very slow although districts and agencies have made much effort recently. So far the deadline to complete site clearance as per commitment has failed to be obtained. More importantly it is unclear when this task will finish because of many difficulties. Currently no districts dare to make commitments on the time limit to handle over the entire site for the project.
Mr. Quang said some works should be carried out synchronously and ground handover should be done before construction starts on some major items of the project. That aims to prevent the implementation way like the first metro line clearing the site and constructing bid packages at the same time, which has resulted in lots of consequences.
He urged relevant districts to hand over clean land fund for the project as soon as possible under the principal of applying legal provisions to best benefit residents in a tight and legal manner.
Talking about capital source, he said that there should be an agreement on the mid term capital adjustment plan to have additional funds for the project. In case of difficulties in procedures, relevant sides should report to the city People’s Committee to advance on a certain source to make payment at the earliest and find another source to make up the advance while submitting the adjusted mid term capital plan to the city People’s Council for approval. District People’s Committees should be guided to issue construction permits within the safe corridor of the metro line route, paying attention to prevent construction works from affecting residents’ lives and operation of the metro line.
Leaders of agencies should review suggestions by districts and synthesize these to submit the city People’s Committee to create a harmonious coordination among them. There should be a special mechanism in technical infrastructure, trees, water supply and telecom system to clear difficulties, he emphasized. 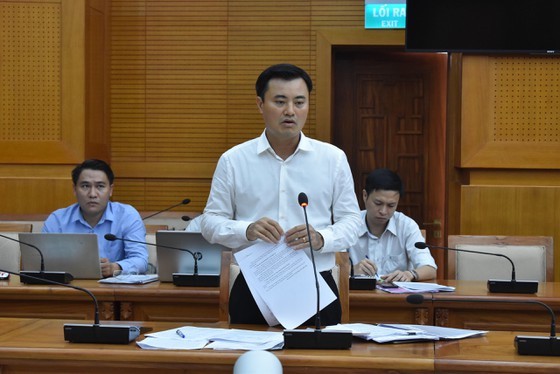