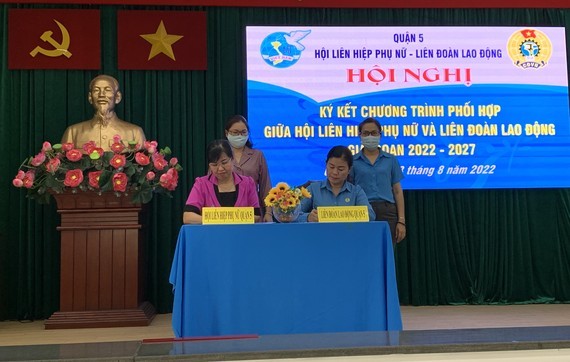 In the past five years, the Labor Confederation and the Women's Union of District 5 carried out many activities to improve legal knowledge for female workers. Through activities and movements, 89 members and 99 typical union members joined the Party.

The two units also coordinated with the landlords to not raise the rent and apply electricity and water prices as prescribed. They also mobilized schools to exempt or reduce tuition fees for children of underprivileged workers and organized for children of district public servants and laborers with high academic achievements to attend Thanh Da Summer Camp. Besides, 510 Nguyen Duc Canh scholarships were awarded to children of disadvantaged public servants and workers, and 394 Nguyen Thi Minh Khai scholarships were given to difficult and studious students.

At the event, the two units continued to sign cooperation agreements with many specific contents, such as strengthening information exchange on women's activities and gender equality, preventing domestic violence, and taking care of reproductive health for female workers. The two units will participate in monitoring the implementation of policies related to female workers and domestic violence prevention, mobilize resources to support women in difficult circumstances and single moms, and take care of female workers and laborers in trade unions, children of public officials, civil servants, workers, and laborers in difficult circumstances.

Besides mobilizing resources to support women in difficult circumstances and single moms, the two units also urged women to protect the environment, plant trees, sort waste at the source, and fight against plastic waste pollution.

On this occasion, the HCMC Labor Confederation granted 979 certificates to volunteers who are union members of District 5 who had actively participated in the Covid-19 prevention and control, organized specializing seminar in the prevention and combat of "black credit" crimes and hi-tech frauds for 250 officials, members, and trade union members in the district.