A security guard at a grocery store in District 5 said they had to close their doors in March due to sluggish sales while the lease was too high.

The owner of an eyewear store near Ben Thanh Market had been leasing a town house for more than 30 years at a rather low price, which got lowered even more during the pandemic, but still fear they might not make enough profit to pay the rent now.

Most town houses whose lease contracts were ceased are in the center of District 1 and suburban districts.

Owners of such previously leased houses are also stuck trying to find other rentees. Relatively well-off city people used to purchase mid price apartments to rent out for extra monthly cash, but this is no longer profitable during the pandemic. 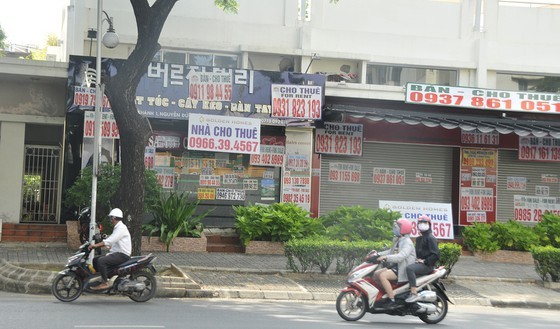 Houses for sales and for rent in District 7

According to the Agency for Management of Housing and Real Estate Market, in the first quarter of 2020 prices of apartments in HCMC upped 3.5% year-on-year; residential houses upped by 8.36%.

Meanwhile, an online survey by a reputable real estate company showed that the secondary apartment market in HCMC recorded 5% - 10% discounts. Prices on the secondary market is expected to decrease further, as house users and investors would be unable to meet payment terms due to lower income amidst the pandemic.

Many landlords tried giving huge deductions on leased urban estates for retails and office space, but most business owners are still wary since most supply chains have not fully recovered. In contrast, for large premises, huge leasing discounts are much more well-received.

On the other hand, as online shopping becomes more popular, retail spaces might be made redundant in the near future, experts said.