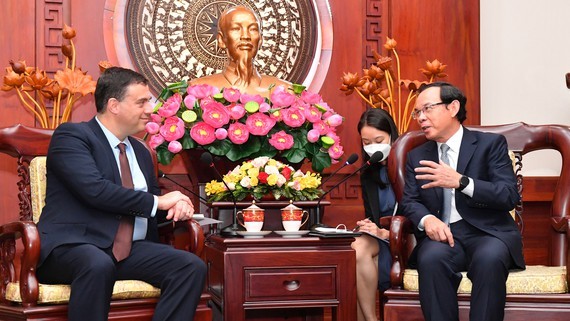 In addition, during his tenure, Ambassador Nadav Eshcar also implemented the Start-up Accelerator Program for Vietnamese and Israeli young people. According to Mr. Nguyen Van Nen, the Ho Chi Minh City government highly appreciates the start-up program being transferred by Israel to the young Vietnamese generation for activating the entrepreneurial spirit of the young generation.
In terms of education, Israel and Ho Chi Minh City have also had very successful cooperation, especially in the field of agricultural education. Every year, Israel welcomes about 150 students from Ho Chi Minh City to study hi-tech agriculture. At the same time, there has been coordination, sharing, and support between companies, businesses, and universities in the two countries. Israel also wants to support the next direction of cooperation related to the smart city project of Ho Chi Minh City, where there are two seaports and many infrastructures that need to be developed in the future.
Mr. Nguyen Van Nen said that the imprints left by Ambassador Nadav Eshcar in various fields during the past five years have contributed to deepening the cooperation between the two sides.
The city government highly appreciated Israel's methods of transfer, transmission, and support for cooperation projects in transferring technology, biotechnology, innovative technology, agriculture, and education between the two countries.
Ambassador Nadav Eshcar pledged that, after the end of his term, he would continue to use his influence and experience to influence and promote the cooperation between the two sides in many fields, and believes that it is important regardless of his position. He believed that the cooperation between the two countries has also developed more.
On the same day, Mr. Phan Van Mai, Chairman of the People's Committee of Ho Chi Minh City also had a meeting with Ambassador Nadav Eshcar who bade farewell to Mr. Mai.