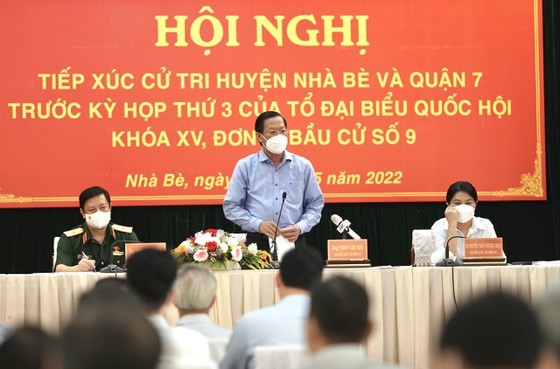 Chairman of the Municipal People’s Committee Phan Van Mai speaks at the conference.

At the conference, the proposal of handling difficulties for anti-flooding projects, including anti-flooding projects due to high tides is a target of voters of Nha Be District. Meanwhile, voters of District 7 had opinions about housing, real estate and construction issues, especially the usage of 28-hectare public land for public works for residents; handling the granting of land use rights, ownership of the house and other properties associated with land for over 50,000 apartments, prioritizing the implementation of the Nguyen Khoai bridge and road project.
Through meeting with voters of two districts, the central agencies also said that it is urgent to amend the Land Law 2013. 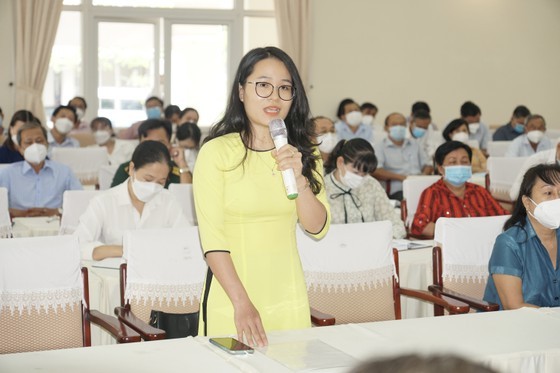 A voter of Nha Be District gives opinion at the conference.
Regarding the housing issue, Chairman Phan Van Mai affirmed that HCMC will focus on deploying additional accommodations for workers. After listening to the shares from voters, the city leader realized that many workers and civil servants have only had the demand of renting houses depending on their income instead of buying the house.
Recently, the Municipal People's Committee has also directed the Department of Construction, the HCMC Housing Development Fund to study and propose a mechanism to support loan interest rates for some subjects to buy and repair houses.

The city has been removing procedures for land and construction, specifically, spending 20 percent of the social housing land fund for the commercial housing projects, officially accepting of granting the certificate of land use rights, ownership of the house and other properties associated with land for housing projects being smaller with the official design; approving the policy of granting land-use rights with free-of-charge for religious facilities or using religious land for social welfares purpose.

Regarding land management and amendment to land law, HCMC People’s Committee Chairman Phan Van Mai informed that the city had proposed detailed petitions to the Central which would be discussed through the three meeting sessions of the National Assembly and be expected to be approved by the end of 2023.

Concerning switching from suburban district to district, Chairman Phan Van Mai assigned the Municipal Department of Internal Affairs to chair and complete the plan which will be approved by mid of this year.

Chairman Mai also reported the socio-economic recovery of the city in the first five months of the year.