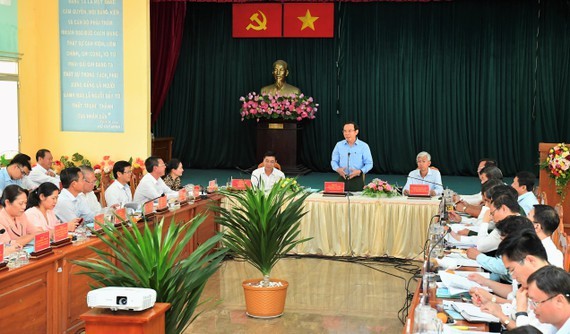 Secretary of the HCMC Party Committee, Nguyen Van Nen chairs a working session with Can Gio District's authorities. (Photo: SGGP)
Speaking at a working session with the authorities of Can Gio District on April 24, HCMC Party Chief Nguyen Van Nen asked the municipal Department of Planning and Investment to coordinate with relvant units to draft special development resolution for Can Gio and submit them for consideration.

Can Gio coastal District located 60km away from downtown HCMC covers over 70,000 hectares, occupying one-third of the city’s total area. The area of protected mangrove forest accounted for 45 percent of the total natural area of the district. The Can Gio Mangrove Forest was recognized as a global biosphere reserve by UNESCO in 2000. However, the district’s development is not to its potentials and unique geographic position, he added.
Regarding to the upcoming missions and tasks, Mr. Nen has delegated the district’s authorities to implement the duo goals of containing the Covid-19 pandemic while maintaining economic growth, especially tightening land and sea borders controls and strengthening surveillance along the borders to prevent illegal entry to minimize the spread of Covid-19 transmission.
He also stressed the implementation of the urban planning, public administration reforms, digital transformation, smart urban area, E-Government. The most important tasks which must be carried out frequently are the maintaining national security and public order, and environment protection measures.

The UNESCO-listed Can Gio Biosphere Reserve should be well-preserved because it is the most iconic tourist attraction of HCMC, the city’s leader emphasized.
Can Gio District has set a target of developing into an ecological urban area combined with the implementation of the smart city project, promoting potentials, strong points, ocean economy and tourism, preserving mangrove biosphere reserve in the 2020-2025 period, said Secretary of the Can Gio District Party Committee, Le Minh Dung.
The district has also focused on managing land and strengthened construction order management, he added. 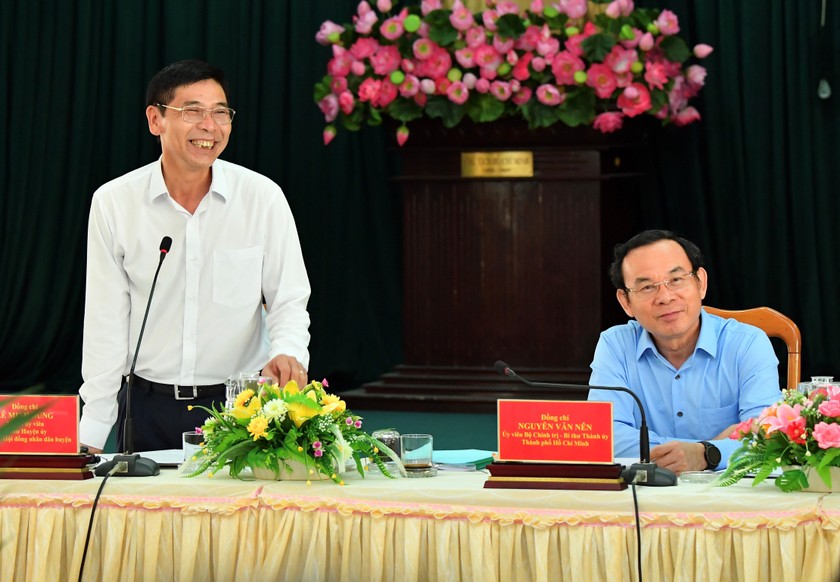 Secretary of the Can Gio District Party Committee, Le Minh Dung (L) speaks at the meeting.
Secretary Le Minh Dung suggested the municipal Government to submit proposals to Prime Minister to allow the district to implement projects, including planning adjustment of land areas for various purposes; setting up construction investment projects of road and trans-commune bridges of Binh Khanh, An Thoi Dong, Ly Nhon and Long Hoa; Can Gio Bridge.
In addition, he also proposed HCMC’s authorities to speed up the progress of Can Gio sea encroachment tourist urban area covering on an area of 2,870 hectares. The area located in a low-lying coastal zone in Long Hoa Commune, Can Thanh Town is 18km from the Can Gio Mangrove Biosphere Reserve; 2.7km from the navigation channel of Xoai Rap River; 4.5km from Long Tau River; 17km from Vam Sat Eco-Tourism Area; and 4km from Monkey Island. The project is expected to see an estimate on the population of around 228,506 people, create 25,000 jobs and donate a large amount of revenue to the city’s budget. 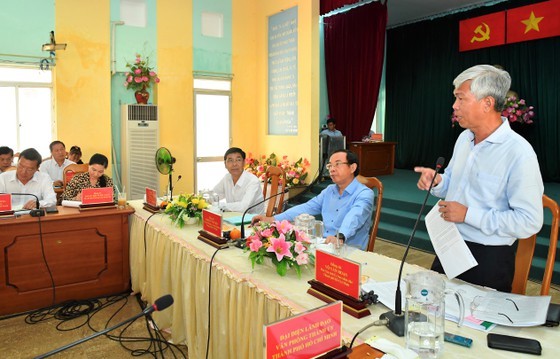