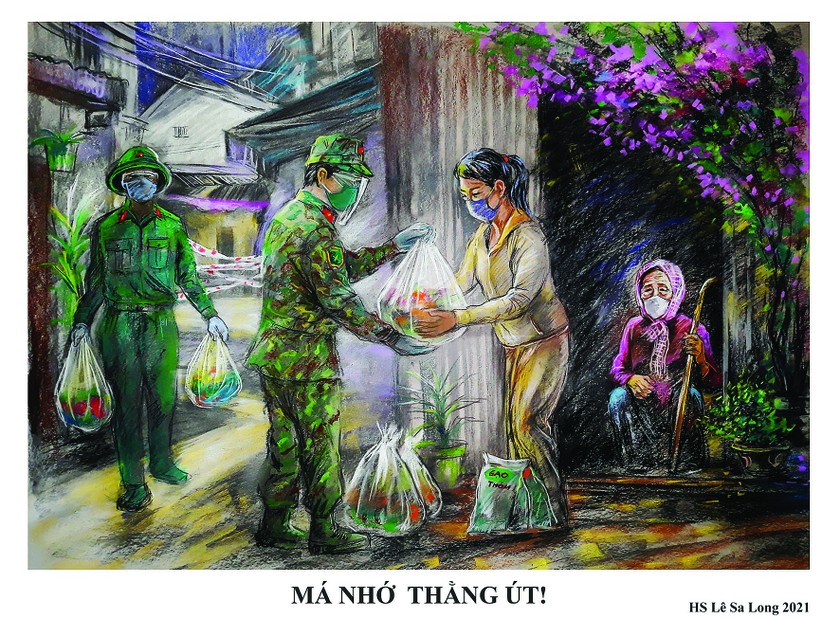 At around 10pm on a day of late December 2021, it was rather quiet around Binh Minh apartment block in Thu Duc City (HCMC). This site, with 200 rooms divided into two levels, has been transformed into a field hospital to treat 1,500 Covid-19 patients.

Major Dao Chi Dung and his 36 comrades have been assigned to work here since July 2021 to support the healthcare staff in distributing essential commodities and food to patients or transporting medical equipment, medication. They have tried to ensure security and order for this place 24 hours a day, sometimes even at the expense of their daily activities.

In June 2021, HCMC detected tens of new Covid-19 cases each day, most related to Phuc Hung religious mission in Go Vap District. The outbreak alarmingly spread to the whole city, attacking even hospitals and clinics and wreaking a havoc in various places.

The whole healthcare system of HCMC was overloaded as it had to strain itself to fight the pandemic. Doctors, nurses, and the front line forces were sleepless caring for patients, taking Covid-19 test samples of thousands of people a day and putting new hot spots under control. All were exhausted to the point of giving up.

Right at that time, Military Zone 7 and the HCMC High Command sent 130,000 soldiers and standing militia to help with pandemic prevention and control tasks. Tens of thousands of military doctors from all over the country were also called upon to contribute to this fierce fight in the southern largest city.

Less than 48 hours receiving this calling, on August 21, 2021 more than 2,000 officers and students from the Vietnam Military Medical University in Hanoi flew to HCMC to take part in the combat. They were immediately sent as reinforcement to field hospitals and newly established grassroots mobile clinics.

Performing duty in residential areas with a high density of F0 cases, these medical soldiers faced several kinds of trouble, including the distinct possibility of being infected. However, as a ‘soldier of Uncle Ho’, they were ready to fight against the enemy with the highest determination by always available to answer the daily and medical needs of residents.

Statistics reveal that during that harsh time, these soldiers provided care for over 76,000 F0 cases, helped to vaccinate 523,000 people, and took 2.4 million samples for Covid-19 test.

After months of continuously fighting against the virus, everyone from the municipal authorities, the medical staff, the front line forces, the army to each citizen was relief when the fourth outbreak was basically under control. The medical soldiers felt that all their hard work has been paid off well.

As the Tet holiday is approaching, life in HCMC has gradually returned back to the new normal status. Nevertheless, thousands of soldiers in the HCMC High Command are still on duty in operating field hospitals and medical quarantine areas to serve those in need. They will not stop until the final combat is finally won and citizens are again totally safe from that persistent virus.