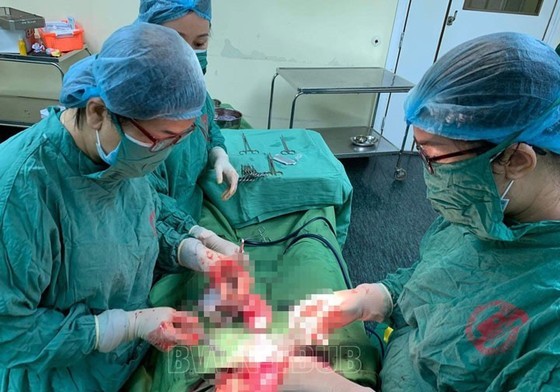 Vietnamese doctors conduct surgery on woman with two wombs carrying twin in each
The 29-year-old woman in Quang Ninh Province was admitted to the hospital with increasing abdominal pain when she was pregnant with twins for the second time when she was 32 weeks pregnant.
Dr. Vu Thi Dung, Head of the Department of On-Demand Treatment, said that after examining and looking at the ultrasound images, doctors were very surprised that she had two separate uteruses and the pregnant was going into labor. This is the first time doctors at the hospital have received such a case and the plan was for her to have both of the babies by cesarean section because she had an operation before.
According to Dr. Vu Thi Dung, as normal, if a woman is pregnant with twins, the two fetuses will develop together in the uterus. However, in this case, the two fetuses develop separately in two uteruses. Not only rare but also more special when this case of twin pregnancy is a completely natural pregnancy.
Dr. Vu Thi Dung said that some people with a double uterus may also have two cervixes, two fallopian tubes and two vaginal canals. This is a rare inborn irregularity.
Two healthy boys were given birth with a weight of 1,750 grams and 1,550 grams respectively.