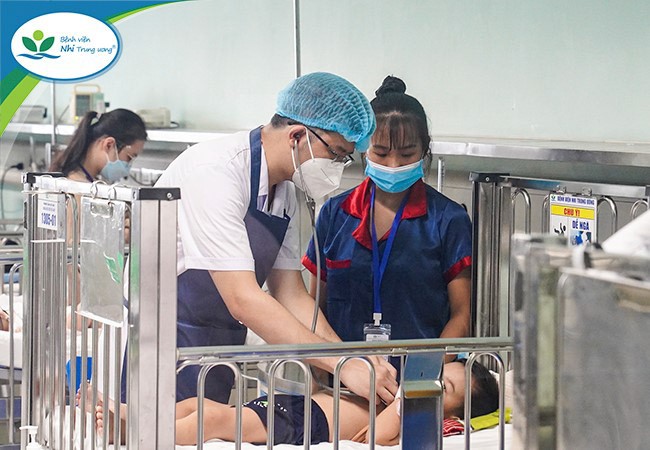 The National Children's Hospital yesterday said that from August to now, the number of children infected with Adenovirus which is most commonly associated with acute respiratory illnesses at the hospital has increased dramatically. To date, the hospital has recorded 412 children infected with Adenovirus, an increase of more than 44 percent compared to the same period in 2021. Worse, six patients died due to Adenovirus infection.
According to Associate Professor Le Thi Hong Hanh, Director of the Respiratory Center in the National Children's Hospital, to date, more than 100 adenovirus serotypes have been classified, of which 51 serotypes are human adenoviruses, divided into seven species (human adenovirus A–F).
More than 50 types cause disease in humans and can cause disease in many organs. Adenoviruses are a group of viruses that cause a variety of infections amongst children.
Adenoviruses are one of the respiratory viruses that can cause the common cold. Symptoms include sore throat, bronchitis, fever, pneumonia, diarrhea, conjunctivitis (pink eye), bladder inflammation or infection, gastroenteritis (inflammation of the stomach and intestines), and neurologic disease
The most Adenoviruses common infections in children are upper respiratory tract infections, lower respiratory tract infections, eye conjunctivitis (pink eye), gastrointestinal diseases (diarrhea, vomiting, nausea), cystitis, and meningitis.

Adenovirus infection is most common in the early spring or winter, but it can also occur throughout the year with no distinct seasonality The virus can spread through sneezing and coughing. Respiratory droplets released in sneezes and coughs can transfer to other people through the air. Adenoviruses are also spread through contact with contaminated surfaces. The viruses have been found to be prevalent in rivers, coastal waters, swimming pool waters, and drinking water supplies, or transmitted when healthy people share personal items with sick people. The incubation period is about 8-12 days.
Adenovirus can cause disease in all people of all ages, most commonly seen in children between the ages of 6 months and 5 years. Children infected with Adenovirus often have a high fever, which may last for several days. Children may have a runny nose or congestion, and some children may develop an ear infection. Some children will have respiratory infections such as bronchiolitis or pneumonia. A sore throat is another common symptom. Children can also develop symptoms of pinkeye, which is also called conjunctivitis. Those experiencing breathing difficulties should be treated promptly, or else it can lead to complications such as respiratory failure, sepsis, and multi-organ failure. Children infected with adenovirus upon admission will be isolated in separate wards.
According to doctors, there is currently no adenovirus vaccine available to infirmaries in Vietnam, so the best way to control the spread of the disease is to detect it early.
Moreover, parents should be alert to clinical and epidemiological factors, and not miss tests. Accordingly, if a child has abnormal respiratory symptoms, parents need to immediately take the child to a medical facility for timely examination, diagnosis, and treatment, to avoid possible dangerous complications.