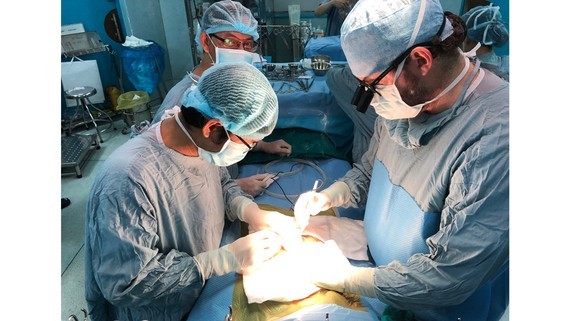 At the Children's Hospital No.2’s Department of Nephrology and Endocrinology in HCMC has treated dozens of pediatric patients on dialysis for many years. According to Dr. Huynh Thi Vu Quynh, Head of the Department of Nephrology – Endocrinology, due to population growth, disease patterns have changed resulting in an increasing proportion of patients with chronic kidney failure including children. Currently, the department is performing hemodialysis for about 40 children with end-stage chronic renal failure. According to current statistics, the survival rate of kidney transplant patients after 1 year is 98 percent and after 5 years about 86 percent. While with other methods, the rate is lower. For instance, this rate for hemodialysis after 5 years is only about 40 percent-50 percent.
Similarly, at the Department of Hepatology - Biliary - Pancreas of Children's Hospital 2, there are also many children with congenital biliary atresia. Each week, the hospital averagely conducts 3-4 surgeries for children with congenital biliary atresia. However, according to doctors, surgery by the Kasai method or creating bile ducts from the liver is only a temporary solution, saving children from death within 9-15 months. Liver transplantation is still a safe method and gives children a better chance of survival.
Children's Hospital 2 is the only pediatric hospital in the southern region that has performed liver, kidney and stem cell transplants for children since 2004 until now. However, the number of children receiving organ transplants is still very small compared to the actual demand. In 18 years, this unit only performed 38 child organ transplants, including 15 liver transplants and 23 kidney transplants. The main reason is due to the scarcity of donated organs.
Professor Tran Dong A, a specialist consultant at Children's Hospital 2, said that for children, most of the organs are donated by living donors, mainly parents of the same bloodline. While the source of donated organs from brain-dead people is very scarce, the law still does not allow brain-dead children under the age of 18 to donate organs. According to Professor A, it’s no sense that brain-dead children still cannot donate organs even though their families allow it. Inappropriate legal regulations have pushed kids with chronic diseases to death before waiting for the donation of organs.
Since the first organ transplant in 1992, Vietnam has performed more than 6,000 organ transplants so far. Currently, the Ministry of Health allowed 23 qualified hospitals in the country to perform organ harvesting and transplantation techniques. Vietnam's organ transplant technology has also made great strides, achieving many difficult techniques such as lung and limb transplants. Along with that, the spirit of giving has spread strongly in the community, bringing an increased number of people registering to donate organs constantly. Presently, about 50,000 people signed up to donate their organs after their death. But in fact, up to 94 percent of transplanted organs come from living donors, whereas a few people have received donated organs from brain-dead donors.
Legally, human organ and tissue transplantation activities in our country are carried out on the basis of the Law "Donating, taking, transplanting human tissues and organs and donating and taking corpses" passed by the National Assembly in 2006 The Law has created a legal corridor for units to invest in facilities, equipment, human resource training, technical deployment, international cooperation to carry out organ and tissue transplant activities. Up to now, according to many experts, a number of provisions in the law have revealed inadequacies; as a result, they are no longer suitable for practical conditions and many new problems arise that need to be adjusted.
Professor Tran Dong A said that the Article 5 of the Law "Donating, taking, transplanting human tissues and organs and donating and removing bodies" clearly has forbidden for children under 18 to donate organs. Thus, the law does not allow brain-dead children to donate organs, even though many children and young families agree to donate organs. Professor Tran Dong A complained that this rigidity of the law has made the already scarce source of organs from brain-dead people even more scarce. This means that the opportunity for children to receive an organ transplant is extremely small, while kids should be given top priority over adults.