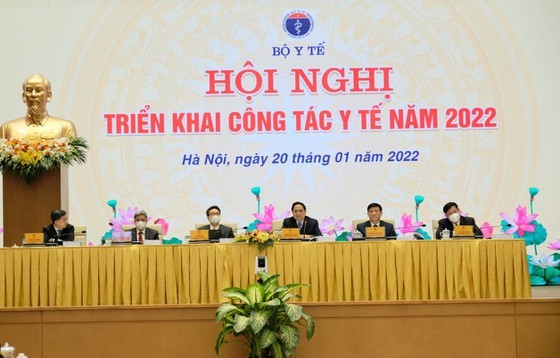 At the conference
The PM spoke this statement at an online conference about healthcare work in 2022 with the participation of leaders of 63 provinces and cities this morning. He said that learning from Ho Chi Minh City’s experience, other localities must be faster in vaccination rollout.
Prime Minister Pham Minh Chinh said that in 2021, Ho Chi Minh City was the country's largest epidemic center. The southern largest city faced difficulties because it is the most populous city.
During this time, the city prioritized the administration of vaccines, medical equipment, and human resources. Subsequently, the epidemic in Ho Chi Minh City is under good control now.
He emphasized that Ho Chi Minh City has been open for nearly a month now with the number of cases and deaths from Covid-19 decreasing sharply.
The city has turned out the green zone. This achievement resulted from good administration of the Covid vaccine, which is an early priority for the city.
The Prime Minister said that the country had only inoculated 42 million doses of Covid-19 vaccine, mainly for Ho Chi Minh City and some other provinces when Vietnam opened on October 11, 2021, according to Resolution 128; however, as of January 18, 2022, about 172 million doses of vaccine have been administered.
Vietnam has been one of the countries with a large vaccine coverage rate in the world. Nevertheless, he requested to speed up the progress on vaccinations for safe opening up.
The Government and the Ministry of Health have been determined to promote vaccine coverage. According to the government and the Ministry’s guidance, the Minister of Health will be held accountable for a shortage of vaccines, and chairpersons of people's committees in cities and provinces must be responsible for the high unvaccinated rate of people, the Prime Minister emphasized.
At the same time, the Prime Minister said that on behalf of the Government, he would launch the movement of injecting the Covid-19 vaccine through Tet holidays in the coming Lunar New Year holiday.
According to leaders of the Ministry of Health, realizing the important role of the Covid-19 vaccine in the fight against epidemics in our country, leaders of the Party, State and Government have paid special attention to purchase, import, and fast administration of vaccines.
Additionally, healthcare workers give free vaccines to foreigners living, residing, and working in Vietnam.
To date, Vietnam has received over 209 million doses of the Covid-19 vaccine from different sources and has allocated about 188 million doses while the remaining vaccines are under check for quality control and vaccine release.
Up to this point, the coverage rate of the first dose of vaccine is 100 percent, and 94 percent of the population aged 18 years and older have been inoculated the second dose.
Regarding the implementation of immunization for children from 12 to 17 year old, the country has so far injected more than 14.6 million doses, the vaccine coverage rate of at least 1 dose of vaccine is 91 percent and the vaccine coverage rate of 2 doses is 73.7 percent. Thirty-five provinces and cities have injected the first dose for this age group.
According to the Ministry of Health, up to now, Vietnam has reached over 70 percent of the population being vaccinated with the basic dose of the Covid-19 vaccine.
In comparison with the target recommended by WHO, Vietnam has achieved the goal six months earlier. It is expected that Vietnam will complete the third dose of the vaccine by the end of the first quarter of 2022.