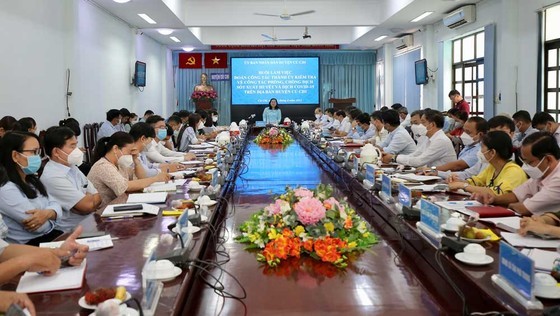 At the meeting (Photo: SGGP)
At the meeting with the delegation led by Chairwoman Nguyen Thi Le, Vice Chairman of Cu Chi District People's Committee Nguyen Thi Hang said that since the beginning of the year, the district has recorded 1,205 outbreaks with 1,549 dengue inpatients and 1,001 outpatients.
Noticeably, out of a total of 2,500 inpatients and outpatients, many are workers who got the disease at work or in other localities. The district also reported four deaths caused by the dengue virus. In addition, Cu Chi District still has identified 469 vulnerable localities in dengue risk areas.
Explaining the reason why Cu Chi District is one of the five localities with the highest number of dengue cases in the city since the beginning of the year, Ms. Nguyen Thi Hang shared that the district has over 50 percent of agricultural land, focusing on agricultural production.
In many industrial zones, there are a large number of immigrants, and the sanitary conditions in the areas are poor. The risk of dengue transmission is increased by poor environmental management and water storage practices. Some households store water in jars and water storage containers for breeding livestock and irrigating ornamental plants.
Meanwhile, local inspectors have issued administrative fines on 16 individuals and organizations violating regulations on epidemic prevention and control. However, in reality, scores of households do not comply with epidemic prevention regulations.
Thanks to the application of preventative measures in fighting the Covid-19 pandemic in dengue prevention, in the past four weeks, the number of new dengue cases in the district has decreased continuously. Specifically, An Phu commune in June reported 32 inpatients but the number of cases decreased by seven cases in July, Hoa Phu commune has eight cases while it had 16 cases in June and Tan Thanh Dong commune had 24 cases in July meanwhile it reported 50 cases in June.
Being one of the communes with a high rate of dengue infection in Cu Chi district, Vice Chairman of Binh My Commune People's Committee Pham Tan Phat also pointed out the culprit of the dengue pandemic as the locality has 144 large and small canals and canals where mosquitoes lay their eggs in.
Deputy Director of Ho Chi Minh City Department of Health Nguyen Huu Hung acknowledged that the development of the dengue epidemic in Cu Chi District is still complicated. Although in the past month, the number of new cases in the district has decreased, if the average is 100 cases, there are 2 severe cases. 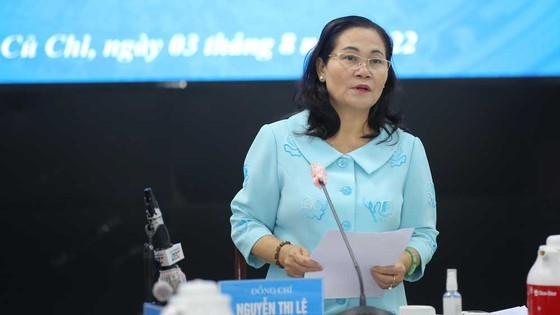 Chairwoman Nguyen Thi Le
Therefore, he proposed that leaders of Cu Chi Districtneed direct more closely the epidemic prevention and control in the coming time as well as spray chemicals to kill larvae in high-risk areas. Furthermore, local administrations in Cu Chi District should continue to remind people to carry out anti-mosquito measures including imposing administrative sanctions on households and businesses that have not yet implemented anti-mosquito measures.
Chairwoman of the People's Council of Ho Chi Minh City Nguyen Thi Le highly appreciated Cu Chi District's efforts in disease prevention over the past time. Especially, through drastic measures to prevent dengue, in July alone, the number of new cases in the district decreased by 200 cases compared to June. She said the district needs to keep Cu Chi as a green zone for epidemics including dengue.
According to the Ho Chi Minh City Center for Disease Control (HCDC)’s statistics, from January 1 to July 31, Ho Chi Minh City had 36,174 dengue cases. Currently, 2,000 people are being treated in hospitals across the city. Of the 2,000 hospitalizations, 1,217 are adults, 783 children, and 32 pregnant women.
Worse, 144 are severe cases and 67 of them are city dwellers while 10 patients are being put on invasive ventilators and 6 have been on dialysis. This year, the city has so far had 16 dengue deaths, including 13 confirmed deaths caused by the dengue virus and three cases waiting for medical experts’ conclusion.