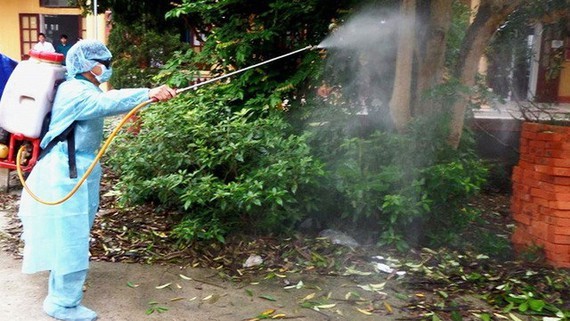 A medical worker spreays chemical to get rid of mosquitoes
Specifically, as of June 16, the city recorded 16,057 dengue cases, an increase of 117.3 percent over the same period in 2021. The number of severe dengue cases was 274. In the week, one patient succumbed to dengue.
The number of dengue cases continued to increase in all districts and Thu Duc City. Tan Hung Thuan and Thanh Loc wards in District 12, Linh Xuan Ward in Thu Duc City, Binh Chanh Commune in Binh Chanh outlying district, and Trung Chanh Commune in Hoc Mon suburban district have had a higher number of cases compared to the average of four weeks ago.
From June 10 to June 16, the city recorded 136 new dengue outbreaks in 77 wards and communes in 16/22 districts and Thu Duc City, an increase of 13 new outbreaks compared to the previous week. Medical workers in districts have sprayed chemicals to get rid of mosquitoes and larva at 257 outbreaks.
Also between June 10 and June 16, the city recorded an additional 932 cases of HFMD, bringing the total number of cases since the beginning of the year to 6,767 cases, down 105 cases ( or 10.1 percent) compared to the average of the previous four weeks.
Cases of HFMD surged in Binh Tri Dong B Ward in Binh Tan District, Thoi An Ward in District 12, and Long Truong Ward in District 9.
In the past week, five new HFMD outbreaks in Binh Thanh, Binh Tan districts, and Thu Duc City, an increase of four outbreaks compared to the prior week. 56 outbreaks have been  reported so far.