Mr. Nhan led a group of staffs arrived at the house of former Director of Tumor Hospital Professor Nguyen Chan Hung. Party Chief Nhan highly valued Professor Hung’s positive attitude. Professor Hung has been one of those who contributed greatly to push up HCMC to be the country’s largest cancer center. All contributions will be gratefully received.
On the same day, the group continued to drop by former Principal of Medicine University Professor Dang Van Phuoc. While talking with Professor Phuoc, Mr. Nhan showed his gratitude to Professor Phuoc’s substantial contribution during 45 years in the position.
Presently, being the chairman of the Vietnam Heart Association and professional consultant at the Medicine University Hospital, Professor Phuoc has still made significant contributions to training of medicine students.
At the meeting between the group with leaders of the Military 175 Hospital on the day, Director Major General Nguyen Hong Son expressed his delight to city leaders’ care to the hospital’s physicians in celebration of the Vietnamese Doctor Day. 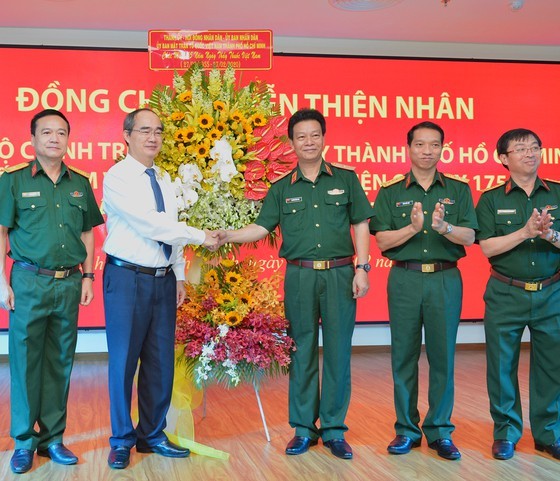 Mr.  Nhan congratulates Military 175 Hospital Director Major General Nguyen Hong Son and  other physicians at the visit to the hospital (Photo: SGGP)
Major General Son elaborated that the hospital has been building a new section with 4,000 beds which is scheduled to complete in 2025. Lately, the hospital has put into operation of high quality treatment building.
Mr. Nhan was happy at the hospital’s growth. He said that for more than 10 years, over VND630 billion (US$27 million) was allocated for building the hospital with the orientation to meet city dwellers’ treatment demand by 2025. He expected that the hospital will be one of leading hospitals in the city.
On behalf of the city Party Committee, government and residents, Mr. Nhan sent his grateful thanks to the hospital’s contribution to the city’s development.
Every day, the hospital receives 1,200 patients and approximately 200 inpatients and performs 40-50 operations a day.