At a working session with HCM City’s leaders on April 28, Binh said the city should review its COVID-19 prevention and control from the highest to the grassroots levels. 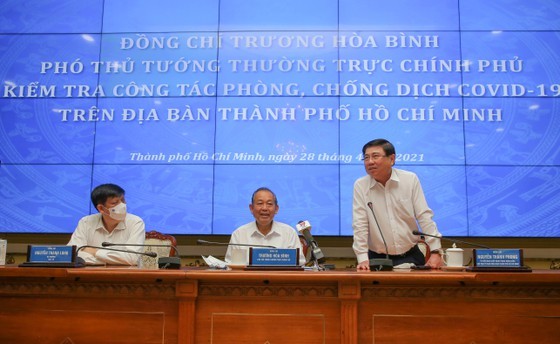 Deputy PM Truong Hoa Binh speaks at the working session (Photo: SGGP)
Along with strengthening the inspection of pandemic prevention activities, especially at hospitals, schools, supermarkets, and places of worship, it should strictly punish those who fail to abide by prevention and control regulations as well as those facilitating illegal entry into Vietnam and illegal immigrants, he said.
Amid the complex developments in the region and the world, localities around the country must strictly implement the directions from the Party Central Committee’s Secretariat, the Government, and the Prime Minister, especially during the National Reunification Day (April 30) and May Day (May 1) holidays and the upcoming general elections, the Deputy PM stressed.
At the working session, Deputy Minister of Public Security Sen. Lieut. Gen. Nguyen Van Son said that, since the beginning of April, the public security force has held four working sessions in southern localities on COVID-19 prevention while directing the force in HCM City to strengthen its engagement in the task.
Meanwhile, Minister of Health Nguyen Thanh Long said that HCMC is facing a high risk of another COVID-19 outbreak, stressing the need for it to work harder to prevent that from happening. Together with cancelling mass gatherings, the city should also prepare more medical equipment for fighting the pandemic, he said.
The minister hoped the city will help Mekong Delta localities in COVID-19 prevention and control.
According to Chairman of the municipal People’s Committee Nguyen Thanh Phong, the city has discovered 108 illegal immigrants since the beginning of April.
Although it has gone 73 days without any cases of domestic transmission, it has remained vigilant. Since April 27, it has strictly punished those not wearing a face mask in public places, while designing specific plans to ensure safety during the upcoming general elections, he said.
Nguyen Tan Binh, Director of the city’s Department of Health, said the southern hub has recorded 254 COVID-19 cases to date, including 68 domestically-transmitted infections.
Since the beginning of the year, it has sent 66 illegal immigrants to quarantine and is encouraging local people to make health declarations and strictly implement the “5K message”.