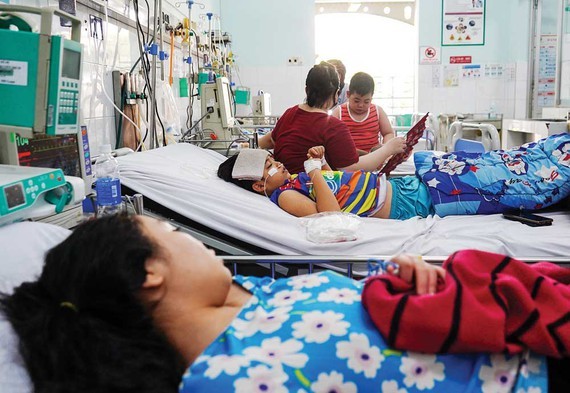 Dengue child patients are being treated in Children's HOspital

According to the Ministry of Health, on the infectious disease surveillance system from the beginning of 2022 until now, the country has recorded 5,545 cases of hand, foot and mouth disease (HFMD) including one death in the South-Central Province of Binh Thuan. Compared to the same period in 2021, although the number of cases and deaths from HFMD decreased, the number of cases now tends to increase, mainly in the southern region.
Accordingly, to actively prevent and minimize cases and deaths, and prevent an outbreak of the epidemic, the Ministry of Health asked people's committees in cities and provinces to direct all agencies and political and political–social organizations to coordinate with the health sector to take measures drastically synchronously for effective prevention and control of disease outbreaks in all localities with a focus on areas with a high number of cases and at risk of outbreaks.
Departments of Health closely monitor the epidemic situation, promptly detect newly arising outbreaks, and localize and thoroughly handle outbreaks as soon as they are detected. Hospitals well organize the treatment division, medical examination, collection, emergency, and treatment of patients, especially preventing cross-infection between HFMD and measles, pneumonia and respiratory infections. Departments of Education and Training in localities coordinate with the health sector to organize extensive propaganda campaigns at schools, especially at kindergartens and kindergartens, about measures to prevent the dangerous disease and epidemics in schools.
In related news, the Center for Disease Control of Ho Chi Minh City (HCDC) yesterday said that while dengue fever in the southern metropolis is prompting red alerts, the number of cases of hand, foot and mouth disease (TCM) continued to increase compared to the average of the previous four weeks in Vietnam in all districts and Thu Duc City. Alarmingly, since the beginning of the year, six people have succumbed to dengue fever.
Specifically, from May 6 to May 12, an additional 628 cases were recorded, nearly three times higher than the average of the previous four weeks. The districts with an increased number of HFMD cases are District 8, Binh Tan, Tan Phu, Thu Duc City, and Binh Chanh District.
From May 6 to May 12, 1,160 dengue cases were recorded, double the average of 4 weeks ago. Amongst infection cases, two deaths were reported in District 11 and Hoc Mon outlying district.
Mr. Nguyen Hoa, Deputy Director of Da Nang Center for Disease Control, said that healthcare workers from preventive medicine centers organized to kill larva at high-risk dengue fever outbreaks. In the past week, Da Nang city recorded around 100 cases of dengue fever.