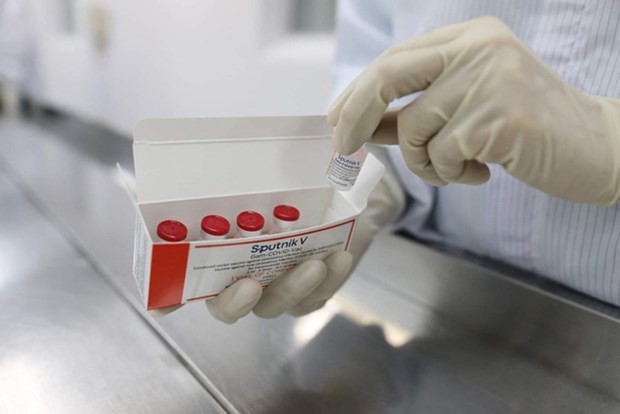 Illustrative image (Photo: Vabiotech)
The batch coded SV-030721M was tested on August 26 by the Gamaleya Research Institute of Epidemiology and Microbiology - developer of the Sputnik V vaccine, and met quality requirements.
Vabiotech President Do Tuan Dat said the company will import semi-finished Sputnik V vaccine this month to pack them, thus helping Vietnam become self-sufficient in Sputnik V vaccine supply.
The vaccine makes use of heterogeneous boosting, meaning that it employs two different vectors over the course of the two shots, which the developer claims to provide longer immunity than ones that use the same delivery mechanism. The gap between two shots is three weeks.
According to the clinical test result announced on “The Lancet” magazine, Sputnik V’s efficacy amounts to 91.6 percent. After injection, 98 percent of volunteers produce antibodies against the virus.
The Vietnamese Health Ministry granted conditional approval of Sputnik V for emergency use on March 23. Later on July 21, Vabiotech officially announced the production of Sputnik V vaccine on a trial basis.
Dat added that Vabiotech is also pushing forward the registration of Sputnik Light vaccine that only needs one shot.