The twins born conjoined at the pelvis were discharged after 84 days after undergoing a separation operation carried out by nearly 100 doctors and medical workers in Ho Chi Minh City in mid-July.

However, Director of the City Children's Hospital Dr. Truong Quang Dinh said the separation surgery conducted nearly three months ago is just the initial success, the conjoined twins must undergo four more surgeries to have a healthy and fully functional body.
Presently, Dieu Nhi has temporary anuses and she will undergo a surgery to close their temporary anuses in the next month.
The two baby girls luckily have two kidneys but they have one bladder, said Dr. Dinh. Fortunately, they can urinate normally and defecate with a temporary anus.
Dr. Dinh revealed that Dieu Nhi has congenital tracheal stenosis, she ventilates normally now. 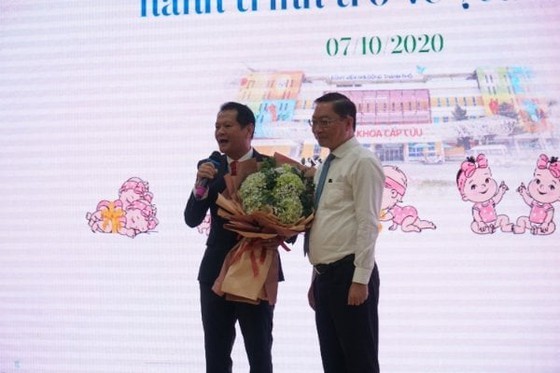 Dr. Dinh speaks at the ceremony (Photo: SGGP)
Physician groups will assess the children by taking MRI scans at their age of 2 for treatment direction in the future. The cost of medical treatment is more than VND668 million (US$28,864) in total and benefactors’ donations have amounted to VND2.3 billion in cash.

Therefore, the remaining money is VND 1.7 billion. The hospital has given a bank account book of VND1.5 billion to the twins parents and kept VND218 million for medical fees in the next time.
Father of the two babies Hoang Anh thanked all staff in the City Children’s Hospital for their dedication during the treatment procedure.
On the occasion, leaders of the HCMC Department of Health awarded certificates of merit to the doctor team of the separation surgery.
The representative of Vietnamese Records also awarded certificates of merit and titled “Complex surgery case with the most participation of the medical team in Vietnam” to the City Children's Hospital and three excellent individuals.

By Thanh An - Translated by Anh Quan