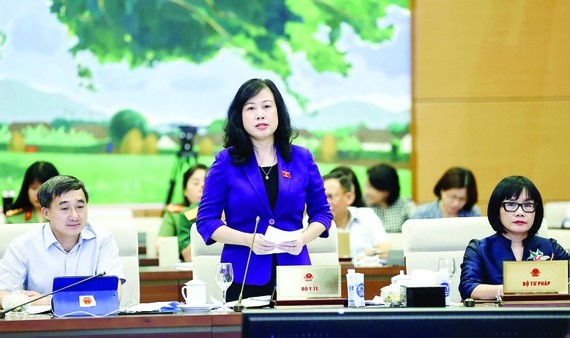 
There are contradictory opinions, some legislators advocated the regulation while others thought that policy-makers should delete the regulation. Chairwoman of the Judiciary Committee Le Thi Nga said that promotions for medical examination and treatment services can be dangerous to patients' health. There should be a ban similar to the ban on promoting medicines directly to users.
Regarding competent agency to issue practice licenses, suspend practice, revoke practice licenses, many legislators express their concern about assigning the Ministry of Public Security to issue, suspend and revoke practice licenses for physicians under their competence.
Speaking at the meeting, Acting Minister of Health Dao Hong Lan said that she expected to include the content of socialization and health finance in the amended Law on Medical Examination and Treatment to solve practical problems that the healthcare sector is facing.
According to Vice Chairman of the National Assembly Nguyen Khac Dinh, saying that the medical staff moving from the public sector to the private sector is a brain drain is not necessarily true, because they are still serving the people. But, this also shows that mechanisms and policies for public health are not good. Thus, policy-makers should correct the present policies with the aim to retain medical workers.
Furthermore, he said that the law must establish a mechanism to protect health workers with specific measures. He emphasized that even though the law has taken effect, assaults against medical staff have been occurring in healthcare settings, said Vice Chairman Nguyen Khac Dinh. He recommended that local government must allocate adequate budget to hire special force to protect medical workers in hospitals.
In the afternoon of the same day, after listening to the reports, reports and discussions, the Standing Committee of the National Assembly agreed in principle to approve two draft resolutions including Resolution amending and supplementing a number of articles of Resolution No. 1210 /2016 on urban classification and Resolution amending and supplementing a number of articles of Resolution No. 1211/2016 on standards of administrative units and classification of administrative units.
Draft resolutions will continue to be finalized and reported to the Standing Committee of the National Assembly before being officially promulgated.
These resolutions are expected to take effect from January 1, 2023.