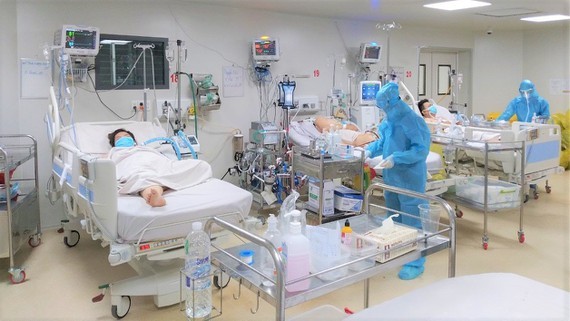 HCMC sees a drop in Covid-19 fresh cases, critical ill cases and deaths
The Department revealed that after nearly two weeks of implementing Directive 18 on controlling the Covid-19 epidemic, and gradual socioeconomic recovery in Ho Chi Minh City, the epidemic situation in the city has been better.
Accordingly, the city has seen a decrease in new cases, severe cases, patients receiving treatment per day and deaths for consecutive days.
Specifically, the number of new cases on October 1 was 3,670 cases while it was 2,723 cases on October 2 and 1,018 cases by October 12. Hospitalizations per day are also dipping while more people have been discharged from hospitals per day after October 1.
For instance, the number of hospitalizations and discharges were 2,046 and 2,866 respectively on October 1 and the number of hospitalized cases and discharges were 1,880 and 3,064 on October 2 respectively; on October 3, there were 1,631 hospital admissions, 4,069 discharges. It appears the Southeast Asian country may finally be curbing the pandemic’s impact.
The number of critically ill patients in hospitals continued to drop after October 1. For example, it was 5,290 on October 1 while it was 5,185 on the next day and 3,162 cases on October 12. The average number of deaths from September 26 to October 2 was 822 but it was 219 from October 10 to October 12.
Nevertheless, the Department of Health advised people to follow the Ministry’s 5 K principle.
According to the Center for Disease Control of Ho Chi Minh City, 56,214 people in the city have received Covid-19 vaccine jabs on October 12.