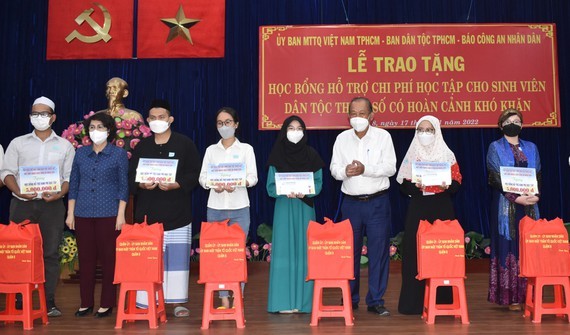 At the scholarship - giving ceremony

On this occasion, businesses, collectives and individuals raised nearly VND5 billion to provide scholarships for local ethnic minority students who are in difficult circumstances.
The ceremony was jointly held by the Vietnam Fatherland Front Committee in HCMC, the municipal Board for Ethnic Minority Affairs and the People’s Public Security Newspaper.
Colonel Tran Kim Tham, Deputy Editor-in-Chief of the People's Public Security Newspaper, said since 2007, the newspaper’s fund for poor and ethnic minority students has presented VND26.6 billion to outstanding students in HCMC and other localities.
Earlier, through the fund, donors provided 60 tablets for children of officers and soldiers belonging to the Khmer group in the southern provinces of Soc Trang and Tra Vinh.