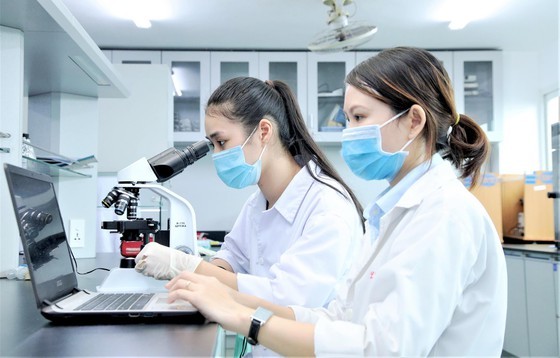 This is a timely support policy to help students access financial resources for their study which may be interrupted due to difficulties after the Covid-19 epidemic.
According to Vice President of Ho Chi Minh City University of Technology Nguyen Quoc Anh, the university confirms thousands of applications for students to complete the procedures for study loans from the Bank for Social Policy in localities every year. This shows that students' demand for loans to study is very large.
However, the current loan rate of VND2.5 million a month is difficult for students to pay the full tuition fee for one year, not to mention other expenses in the learning process.
Director of the Center for Admissions and Communication of the University of Food Industry Pham Thai Son also said that now more and more autonomous schools exercising independent control over their day-to-day operations and curriculum, as opposed to a university in which the government or a government agency controls the academic program also means that tuition fees will be adjusted closely with training costs, not to mention the high-quality programs in the autonomous public schools whose tuition fees are more than double that of mainstream programs.
Therefore, a loan of VND2.5 million a month will not be enough. The National Assembly has a good decision to spend VND3,000 billion for students to study loans and buy computers in the context of the impact of the Covid-19 epidemic, said Director Son.
Along with the above lending policy, many universities such as Industrial University of Ho Chi Minh City, University of Economics Ho Chi Minh City, University of Economics and Law under the National University of Ho Chi Minh City have spent tens of billions of dong to exempt or reduce tuition fees (from 5 percent to 10 percent).
Additionally, the Ho Chi Minh City National University Development Fund (VNU-F) also has a program for students to borrow money to study without interest. Starting in the school year 2020-2021, the program has so far given nearly 200 students interest-free study loans.
This program is implemented by Vietnam National University in Ho Chi Minh City in collaboration with banks to support disadvantaged students to cover part of the cost during their studies. Each student can borrow up to VND20 million a semester.
According to Associate Professor Vu Hai Quan, President of Vietnam National University in Ho Chi Minh City, Vietnam has started to apply a credit policy for students since 1998 with a maximum loan of VND150,000 a month and from 2007 increased to VND2.5 million monthly.
Although the regulations on credit policy for students have been revised, it is still generally a social protection policy, supporting financial difficulties rather than a financial policy for higher education. Therefore, still some shortcomings need to be adjusted according to the present situation.
Furthermore, only orphans or members of poor households, low-income households or families experiencing financial difficulties due to accidents, illnesses, natural disasters, new diseases are eligible for loans without interest.
At present, the criteria for determining the standard of poor, near-poor, and average-living households have changed, so the regulations on loan standards need to be revised to ensure they are consistent with reality.
From the above inadequacies, Director Quan proposed that more students are eligible for loans and credit policies. Moreover, students can borrow more money than VND2.5 million to cover tuition fees and their daily spending.
Along with that, the loan interest rate for student loans must be reduced by 3 percent-4 percent yearly as the current interest rate of 6.6 percent is too high. Students can be allowed to pay back the loan during the study with a preferential loan interest rate at 3 percent-4 percent yearly. Students must pay a higher interest rate after graduation.