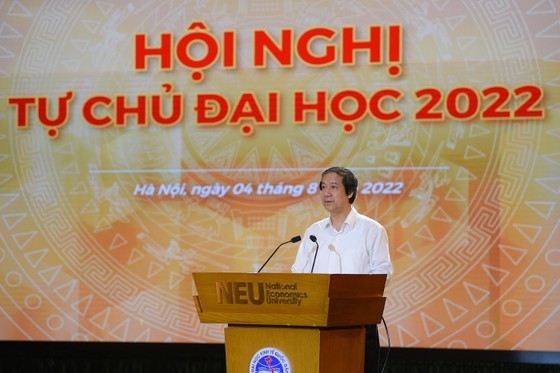 Minister of Education and Training Nguyen Kim Son
Today, the Ministry of Education and Training’s conference on university autonomy in 2022 was chaired by Deputy Prime Minister Vu Duc Dam, Minister of Education and Training Nguyen Kim Son, and Chairman of the National Assembly's Committee for Culture and Education Nguyen Dac Vinh with the participation of more than 900 leaders of central ministries, departments and agencies, representatives of associations and international organizations, secretaries of schools’ party committees, chairpersons of university councils, principals, leaders of the human resources department of higher education institutions nationwide.
The conference aimed to evaluate the achievements in implementing university autonomy as well as verify difficulties and obstacles, for setting up the road map for the upcoming time.
Speaking at the opening of the conference, Minister of Education and Training Nguyen Kim Son emphasized that universities operating with a high degree of autonomy are a common model and mechanism around the world, which has been used in the past. Its long-term existence and superiority have been confirmed in the practice of higher education activities for mankind. University autonomy is inevitable for the fundamental and comprehensive innovation of education in Vietnam.
Autonomy in higher education institutions has been implemented for many years following the direction of the Party and State. Till now, the model has achieved initial achievements, especially after the revised Higher Education Law came into effect. The new model has spurred the development of universities. The value and positive aspects of university autonomy are undeniable.
However, university autonomy is a new and complicated mechanism that needs synchronization of many sectors because there have been still many obstacles during the process due to misunderstandings about the rights and obligations of the parties involved, the conditions arising in order to realize university autonomy. Along with that, there are difficulties and obstacles due to old ways of thinking.
Therefore, this conference is to jointly be more aware of university autonomy, discuss and remove obstacles and difficulties in addition to propose solutions, and what to do in the future to achieve university autonomy for the development of the country’s higher education system.
According to Deputy Minister Hoang Minh Son’s report on the recent university autonomy results, it is a strategic breakthrough that is expected to create a comprehensive revolution for higher education. Up to now, university autonomy has achieved some encouraging results, creating a positive change in both awareness and implementation.
Specifically, from 2003 to 2018, the role and power of school Council was specified by the National Assembly in the revised Law on Higher Education. This is an important step for public higher education institutions to implement autonomy in the organization of the apparatus. Up to now, the country has 154/170 public higher education institutions that have established training councils. The establishment of training councils at schools under ministries, agencies and localities reached the rate of 91.18 percent.
The vast majority of schools implementing autonomy at a comprehensive and extensive level have brought positive results (over 77 percent). According to the survey on implementation of comprehensive and extensive autonomy in enrollment and training, over 80 percent of respondents said that autonomy in enrolment and training has been leading to positive results while over 65 percent of schools that have implemented comprehensive and extensive autonomy in science and technology activities said that results are positive.
The autonomous higher education institutions have actively reviewed and consolidated their organizational apparatus and personnel in a streamlined and efficient manner. University autonomy also helps higher education institutions accelerate social contributions bringing about good upgrade of facilities and equipment to more fully meet teaching requirements and scientific research.
In 2014, the Government issued Resolution No. 77/NQ-CP on piloting renovation of operation mechanism for public higher education institutions in the period 2014-2017. After implementing this Resolution, higher educational facilities have made great strides in opening up resources and the capacity of training institutions has been maximized. Currently, 142/232 universities are eligible for autonomy according to the provisions of the revised Higher Education Law.
Regarding human resources, schools have gradually formed an appropriate human resource structure. Schools have a competition policy, attracting good lecturers with considerable experience. The proportion of lecturers with doctorate degrees is increasing from 25 percent in 2018 to over 31 percent in 2021.
In respect of finance, till now, 32.76 percent of universities can pay for recurrent and investment expenditures while 13.79 percent of schools can self-finance their recurrent expenditures. From 2018 to 2021, the total revenue of the autonomous higher education institutions mostly increased, and the total revenue outside the state budget for recurrent expenditure also increased. A lecturer’s average income increased by 20.8 percent and that of managers surged by 18.7 percent. Some lecturers have an income of over VND200 million a year or their income has increased from 19.4 percent to 31.34 percent while others have an annual income of over VND300 million or more increasing from 0.75 percent to 5.97 percent after three years of implementing autonomy.
According to the Ministry of Education and Training, university autonomy has created a healthy competitive environment. University autonomy helps promote schools to invest in facilities and improve training quality to compete with each other in enrollment and attract good students towards sustainable development. Mass enrollment tends to decrease whereas schools tend to increase the enrollment scale of advanced training programs, high-quality training, joint training with foreign countries, and training in English. From 2019-2021, schools have applied different enrolment methods.
However, the Ministry of Education and Training also pointed out obstacles to university autonomy including the lack of synchronization between laws, limited funding sources, restrictions on the policy of autonomy in public asset management, public investment management, and exploitation and use of non-state budget revenues, restrictions on decentralization, decentralization and implementation of democratic regulations of schools.
It is expected that university autonomy more comprehensively and effectively in the next five years.