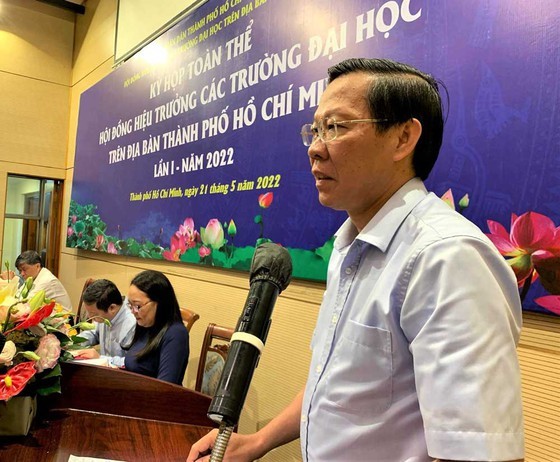 At the first meeting of the Council of Rectors of Universities in the southern metropolis in 2022 at the University of Education yesterday, the council announced the decision to consolidate its personnel and proposed several new activities.
The Council of Rectors in universities in HCMC was approved including Chairman of the Ho Chi Minh City People's Committee Phan Van Mai who was voted to be Chairman while Vice Chairman of the municipal People's Committee Duong Anh Duc was voted to be permanent Vice Chairman of the Council. Other vice chairmen of the Council include Director of Ho Chi Minh City Department of Education and Training Nguyen Van Hieu and Secretary of the Party Committee of HCMC Universities and Colleges Nguyen Thi Minh Hong.
Members of the Council of Rectors of Universities in Ho Chi Minh City include 51 higher education institutions. The Rector's Council consists of six councils according to pedagogical majors, health, culture - art - tourism - society and humanities, technology, economy, and legal politics.
The Council is responsible for helping the municipal People's Committee direct and implement a number of content on improving the quality of higher education in the area, and providing high-quality human resources.
In particular, above all, the council will focus on building a contingent of scientific and technical staff, industry and field managers in the direction of developing Ho Chi Minh City into a center of industry, service, finance, banking, science and education and city dwellers can gradually participate in the regional and international high-tech labor market.
Along with that, the regulations on the organization and operation of the Rector's Council also have some adjustments to the structure and additional members of the Rector's Council are directors and deputy directors of departments such as Science and Technology, and Home Affairs, Finance, Health, Industry, Trade, Culture, Sports, and Tourism.
In 2022, the Rector's Council will focus on key tasks such as developing and implementing 8 component projects of the master plan as well as carrying out the project ‘Building Ho Chi Minh City - A high-quality human resource training center of the country’.