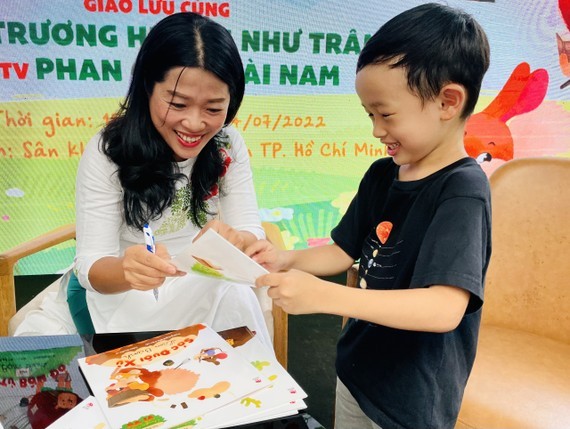 Vietnamese picture books come back in favor
Only one month after its release, the Kim Dong Publishing House's series of picture books Chuyen o trong rung Vi vu (Stories in the Vi vu forest) of writer Truong Huynh Nhu Tran has been re-published. Being an author of children's literature, writer Huynh Nhu said that re-publishing of the picture books is of great pleasure for her as she has tried writing picture books just for a short time.
With his experience in the publishing sector for years, Mr. Phan Cao Hoai Nam, editor of Kim Dong Publishing House, said that nowadays, children are afraid to read books with many words, so picture books are very much in favor.
In addition, parents are so busy that they have spent little time reading books with their children; therefore, they resorted to short picture books to interact with their children. That is the advantage of picture books now, explained Mr. Phan Cao Hoai Nam.
Several local authors such as Dao Trung Uyen, Phuong Huyen, Trinh Ha Giang, Nguyen Tran Thien Loc, Nguyen Tan Thanh Truc, Nguyen Hoang Vu also began writing picture books. Moreover, some young people namely Huynh Kim Lien, Vu Thi Thuy Dung, Duong Ngoc. Tu Quynh, Pham Thu Thuy both write lyrics and draw picture books.
The domestic picture book market is more and more vibrant and rich with the participation of more and more young talented writers. Many picture books have been released and warmly received by both parents and children.
The Kim Dong Publishing House has many sets of picture books that have been reprinted many times such as Tu nhung hat mam (From the Seeds), Vong quanh the gioi (Around the World), Hanh trinh bien doi (Transformation Journey), Tap tuc que em (Customs of My Homeland). Meanwhile, the Young Publishing House’ sets of picture books like Be hoc le giao (Children learning rituals) are favored by children and parents.
Some books have been re-printed up to 100,000 copies; for instance, the book Be tap ke chuyen – Moi tuan mot cau chuyen (Baby story book series - One story a week) has been printed six times so far.
Present in Vietnam since 2000, Room to Read (RtR) Vietnam started to focus on organizing and implementing picture books for toddlers in 2005. To date, RtR has produced more than 200 picture books with 180,000 copies sent to schools in the project's network. All these books are made by local authors and artists.
Each year, RtR organizes a workshop for artists and a program for authors to discuss how to make picture books with experts as well as authors and skilled artists.
A representative of RtR Doan Bao Chau young Vietnamese painters are not worse than their peers in other countries. They are not only good at English, but they can also grasp the problem very quickly and adapt it to Vietnamese culture very well.
However, in terms of content, according to Ms. Doan Bao Chau, domestic authors need to improve more because the scripts of Vietnamese authors do not have much depth compared to picture books in developed countries.