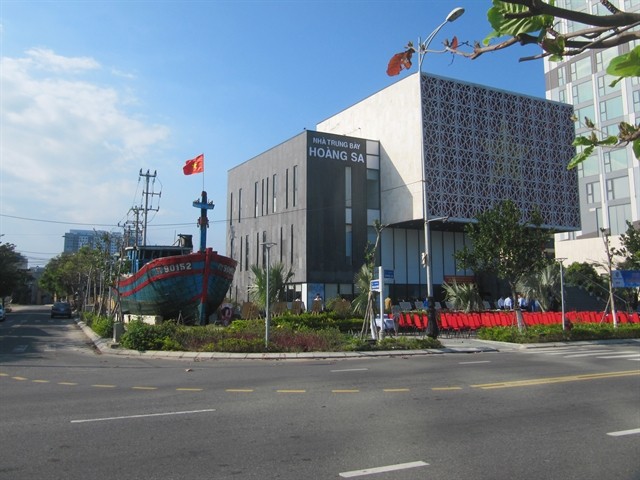 Hoang Sa Museum in Da Nang keeps and exhibits over 400 documents, photos and ancient maps of the Hoang Sa Islands of Vietnam. All the maps clearly show the southernmost point of China stops at Hainan Island. (Photo: VNS)
The museum displays over 400 maps, documents and photos, of which 150 are ancient maps showing the country’s sovereignty over the two archipelagos from the 16th to 19th century.

Between 2012 and 2014, Vietnamese-American engineer Tran Thang collected many old maps and atlases showing clear historical evidence that the southernmost part of China is Hainan Island, and the Hoang Sa and Truong Sa islands belong to Vietnam.

Thang, an aerospace engineer at Pratt & Whitney, the US, said he had not known about the Hoang Sa Islands maps until 2012 when Dr. Mai Ngoc Hong from the Han-Nom Institute in Hanoi, donated an old map published in 1904 by the Qing Dynasty, to the Museum of History of Vietnam. The map clearly indicated the southernmost boundary of China is Hainan Island. 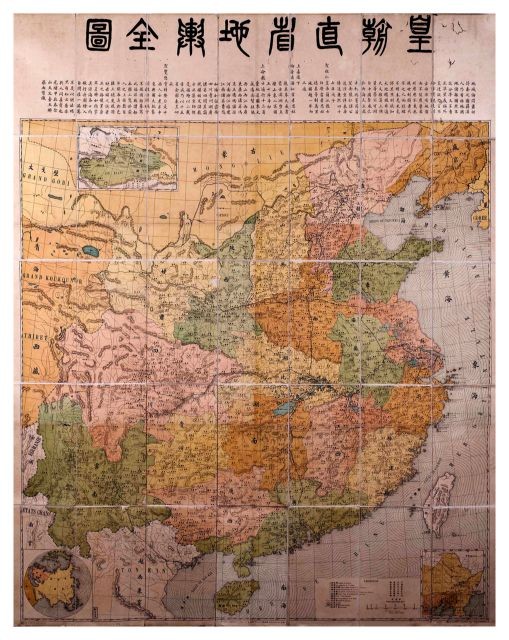 A map published in 1904 by the Qing Dynasty of China, showing Hainan Island is the southernmost border of China. It does not include Hoang Sa and Truong Sa islands. (Photo courtesy of Hoang Sa Museum)
Thang, born in Quang Ngai Province, said the Chinese Qing Dynasty's map motivated him to collect old maps related to Vietnam’s sovereignty over Hoang Sa and Truong Sa islands. He has since collected vast old maps about China and Annam (an old name of Vietnam).

“It’s amazing. I bought an old China atlas in New York in 2012. It was printed in 1933 and published by the Directorate General of Posts, the Ministry of Transportation of the Republic of China. It lists names of 29 official provinces of China, but does not refer to the Paracel and Spratly islands," Thang said.

"The map of the coastal, southeast province of Guangdong, indicates that Hainan Island is the most southerly point of China. 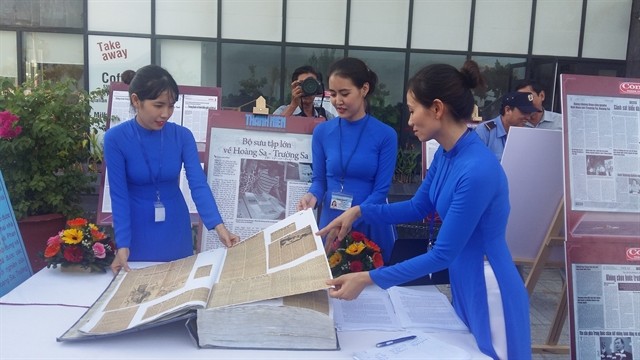 An atlas of Hoang Sa is open for public visits at Hoang Sa Museum in Da Nang. At least 150 ancient maps clearly show the two archipelagos of Hoang Sa and Truong Sa are under Vietnam's sovereignty. (Photo: VNS)
“During 2012 to 2014, I collected 150 old maps, of which 80 are Chinese maps showing the southernmost frontier of China is Hainan Island, and 50 indicating that the Paracels belongs to Vietnam.”

He has since donated the complete map collection to Da Nang City.

Thang, President of the Institute for Vietnamese Culture and Education in New York, said the most added to the collection recently was the Pattie de la Conchinchine, an 1827 map printed in the six-volume World Atlas by late Belgian cartographer Phillippe Vandermaelen.

“The Pattie de la Conchinchine was a rare map printed early in the 19th century in great precision, using western written names of the islands in the Paracels,” he added.

The map also shows the Paracel Islands between the 14th and 17th latitudes, and from the 109th to 113th longitudes.

“It’s a treasure for Vietnam. The map will enrich the store of documents and other artefacts related to the history of Hoang Sa Islands, and facilitate further studies of Vietnam’s islands,” Dong said.

The chairman said a textbook on Vietnam’s sovereignty over the two archipelagos was included in the curriculum at junior secondary and high-school.

The Hoang Sa Museum was inspired by the design of a royal seal from the Nguyen Dynasty’s King Minh Mang in 1835 for establishing the Hoang Sa Flotilla to administer the islands.

It was a stamp of authority for Vietnam’s sovereignty over the Hoang Sa and Truong Sa islands, recorded in documents from previous centuries.

The islands were clearly described in detail on ancient maps and books from the Ly and Nguyen dynasties between the 11th and 19th centuries, according to Huynh Thi Kim Lap from the museum. 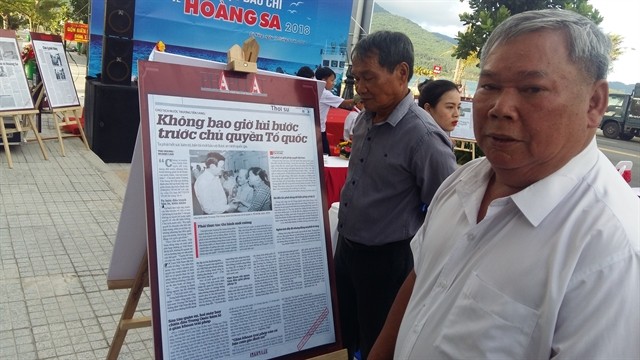 Nguyen Dinh Re visits an exhibition at Hoang Sa Museum. He was dispatched by the Saigon administration to protect the Paracels in 1974. (Photo: VNS)
Lap said the Hong Duc map collection was perfectly compiled integrating the mainland, seas and islands of Dai Viet (Great Viet) under the reign of King Le Thanh Tong in 1490.

Lap said the ancient books of Vietnam, Toan Tap Thien Nam Tu Chi Lo Do Thu (Route Maps from the Capital to Four Directions), drawn by Do Ba in 1686, gave ample of evidence of Vietnam's sovereignty over Hoang Sa and Truong Sa islands.

According to historical documents stored at the museum, a group of islands east of the Paracels was illegally occupied by the Chinese troops in 1956, while the Geneva Peace Agreement was signed in 1954, separating Vietnam into two parts at the 17th parallel (in the middle of the Ben Hai River in Quang Tri Province).

Moreover, in January 1974, China took the rest of the Paracels by force, and has since illegally occupied the islands. 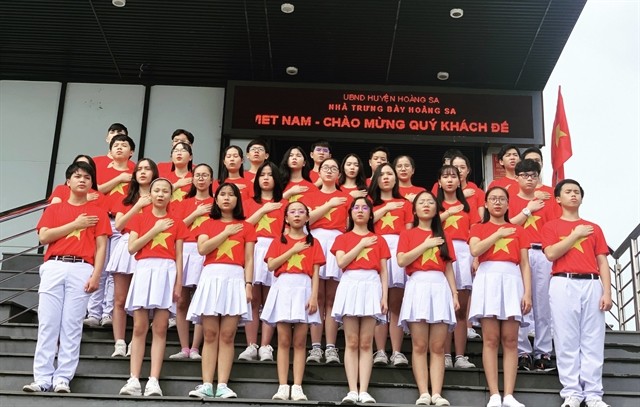