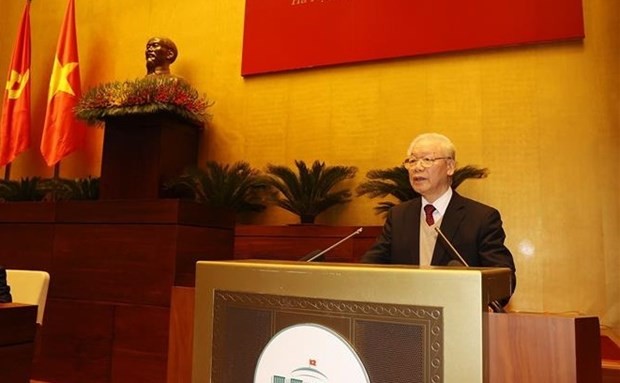 Party General Secretary Nguyen Phu Trong addresses the conference (Photo: VNA)
He said at the National Cultural Conference in Hanoi that looking back on achievements in cultural building and development over the years, especially in 35 years of implementing the “Doi Moi” (Renewal) cause, it can be seen that culture has made great contributions to the national defense and construction.
He highlighted that the awareness of culture has become more comprehensive and deeper in all fields, while cultural products have been more diverse, meeting the social demands. 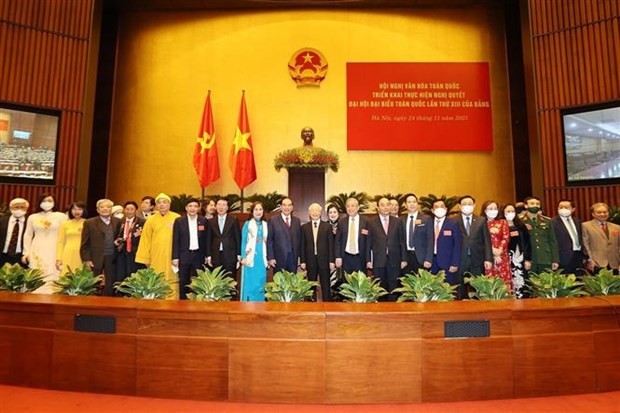 Party General Secretary Nguyen Phu Trong and delegates at the conference (Photo: VNA)
Many traditional cultural values and national cultural heritages have been inherited, preserved and developed, he said, adding that culture in politics and economy has received greater attention. The cultural industry and cultural market have seen positive progress, while cultural exchange and international cooperation and integration have seen new developments, he noted.
Promoting the cultural values and the strength of Vietnamese people will help inspire the aspirations for a prosperous nation, creating a synergy to tap opportunities and overcome challenges, thus successfully fulfilling the target of turning Vietnam into a socialist-oriented developed country in the middle of the 21st century, he said.
The Party leader clarified that boosting cultural development is one of the major contents of the documents adopted at the 13th National Party Congress. For the first time, in the documents, the Party mentioned the cultural issue in a comprehensive and in-depth manner.
The key and consistent stance of the Congress is to strongly inspire the patriotism, self-resilience and aspirations for a wealthy and happy nation, and to promote the synergy of the whole political system, the culture and people of Vietnam, he stressed.

Quan Ho love duet love duet singing has been recognised by UNESCO as an intangible cultural heritage. (Photo: VNA)
In order to continue to build, preserve and promote the national culture, Party General Secretary Trong underscored the need to improve the awareness and leadership capacity of the Party and the State management over the cultural sector to meet the requirements in cultural development and develop Vietnamese people in the period of developing a socialist-oriented market economy as well as stepping up the national industrialization, modernization and international integration.
Culture must be placed in the same position with economy, politics and society, he stressed.
The Party chief also underlined the necessity to pay greater attention to the restoration, conservation and promotion of traditional cultural values, tangible and intangible cultural values of regions and ethnic groups in combination with the absorption of the cultural quintessence of the era.
Developing the “soft power” of Vietnamese culture will contribute to strengthening the country’s synergy in the time to come, he stressed.