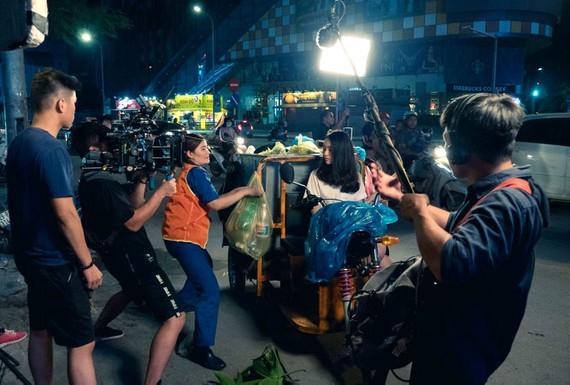 Shooting to compete a scene at the CJ Short Film Project.
One of the movie activities is the program titled “Hanoi Winter 2021 – In Cinema We Trust”, a training program for Vietnamese filmmakers who are developing film projects. 30 young filmmakers and 15 projects have been selected and spent eight days to work together to prepare for a lecture competition. The competition saw the participation of directors, including Nguyen Hoang Diep, Phan Dang Di, Phan Gia Nhat Linh and producer Tran Thu Bich Ngoc.

The CJ Short Film Project organized by CJ Cultural Foundation and CGV Vietnam has been kicked off. The best five projects will be given VND300 million (US$13,000) each to make the films.
The Center for Assistance and Development of Movie Talents (TPD) under the Vietnam Cinema Association in collaboration with the UNESCO offered a filmmaking course called ON THE REEL Film Lab to young Vietnamese filmmakers with the support of of the General Delegation Wallonia – Brussels (Belgium) in Vietnam, HKFilm, WallSound, Hanoi Grapevine and Colab Vietnam. ON THE REEL Film Lab included two workshops alternating with discussions among participants and mentors to strengthen and complete the project. The course aims to provide basic knowledge to help young filmmakers develop short film projects, find a suitable production route and self-orient a filmmaking career. The judge selected six short film projects for two cash prizes, two audio post-production package from the sponsor Wallsound and two packages of camera and lighting equipment from the sponsor HKFilm.
Vo Minh Hoang Anh, a member of the YOLO team who is taking part in an annual short filmmaking competition titled the TOP - The Original Project for students of high schools and universities in Hanoi said that young filmmakers now have many advantages, including advanced technologies and modern equipment, video editing software, many forums, workshops and film contests offering valuable experiences, skills and prizes.
Independent filmmaker, director Tran Thanh Huy who took part in the appraisal board of the CJ Short Film Project for the first time said that he will do his best to support contestants with his experience.
All movie activities aims to create a playing connecting film lovers as well as provide knowledge and filmmaking skills to beginners, said Ms. Nguyen Thi Phuong Anh, a representative of Xine House.
Director Phan Gia Nhat Linh stressed that filmmaking is a collective work that requires filmmakers to connect and support with each other. The movie activities also aim to create a strong community and contribute to the development of the film industry.