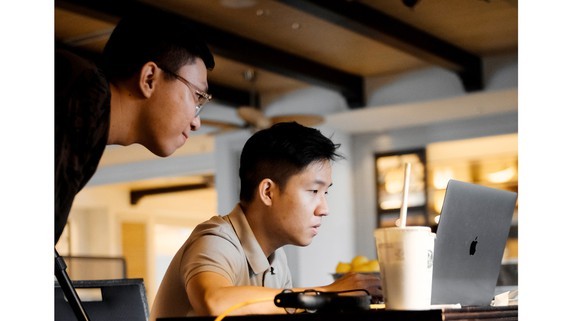 However, making money from speaking and broadcasting live is not easy. When anyone can become a streamer, the line between work and offensive tricks to attract views becomes even more fragile.
An online streamer or live streamer is a person who broadcasts themselves online through a live stream or prerecorded video.
In Vietnam, about three years ago, young people started to pay attention and pursue this job as a trend of making money online.
In the past, streamers are usually gamers who give advice and ways for gamers to level up; or comments on other players' matches or introduction of new games to players. However, now streamer is not only in the gaming industry but many fields that can just have a significant following from social networks.
Sitting in front of a computer screen to talk and earn money from advertising commissions, introducing new products. It sounds seemingly easy but streamers’ visions have been blurred under the pressure of working time.
A 25-year-old Le Thien Toan with nickname Tommy Le in Ho Chi Minh City’s Tan Binh District, a streamer in the field of strategy games, said: “The streamer's income is really good but they have to try hard. They have to have sparkling pictures on their personal page and live broadcast continuously at many time frames for social network users to follow. An online streamer normally works at night or even until 1 am if a viewer leaves a comment asking for an extension."

Furthermore, streamers are not allowed to say no to new technology and equipment because when broadcasting live, viewers will look at it and judge the streamer, from the keyboard, monitor, mouse, and headset. They spend a lot of money upgrading devices, Tommy Le added.
Unlike the original concept - streamers often have extensive knowledge in a certain field, the attraction of this job's huge income makes many young people eagerly want to become a streamer. To attract followers quickly, a female streamer taking advantage of her appearance and gentle speech is also a way to earn donations from people.
Many female streamers wear more revealing attire or they intentionally place the camera to focus on their big breast. After the live streams, 20-year-old hot girl Q.B. in District 1, a racing game streamer, often shares pictures and sad status with her bank account. Despite a lot of bad words about donations, many streamers are like asking for money online openly.
Network administrator Nguyen Dinh Tri in District 12 said that he has been playing games since he was a kid; so he has been watching streamers a lot, but he’s getting bored because more and more female streamers are in revealing clothes whereas male streamers swear and ask for donation continuously.
Making money from online platforms or social networks has become the work trend of modern youth, but to make money requires serious investment and labor. Anyone can join social networks and live streams, but becoming a professional streamer or a native speaker requires determination.