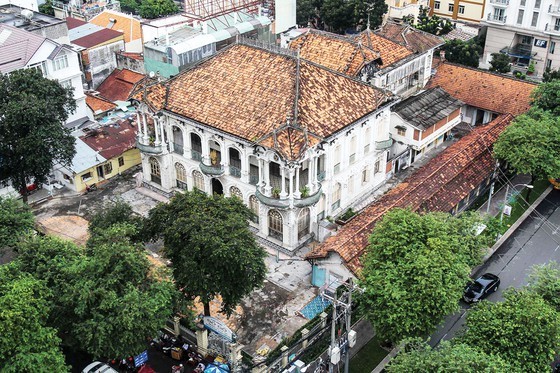 The Phuong Nam old villa, one of the city’s most well-known buildings of its type (Photo: SGGP)
A survey by the HCMC Department of Planning and Architecture in August 2020 showed 560 out of the 1,550 pre-1975 villas in the city are no longer in their original form.

These buildings are said to have carried historical, cultural and architectural values and include one at 12 Ly Tu Trong, 6B Ngo Thoi Nhiem, and a 100-year-old villa at 237 No Trang Long (Binh Thanh District).

Although the old villas have been indexed, classified and their owners given guidance on management, many got degraded while waiting for administrative delays, causing the owners to demolish or alter the buildings without permission, mostly in District 1 and 3.
Therefore, the recent index of old villas by the City’s People’s Committee are seen as “better late than never” by urban planning experts.
Archeologist Dr. Nguyen Thi Hau cited an incident in post-1954 Hanoi where a large number of old villas went through a change of ownership and got altered beyond recognition.
She also attributed failure to preserve this type of heritage to a lack of interest from cultural researchers and the government.
In fact, many villa owners do not want to get indexed for conservation since it will restrict the building’s potential for commercial investment and even affect their family routines.
Dr. Hau proposed certain regulations to honor villa owners’ wishes and financial benefits be added to the current Law on Cultural Heritage.
“The government should allow them to use the buildings as business establishments as long as they use the financial gain to conserve them,” Dr. Dang Thanh Hung of HCMC University of Architecture added.