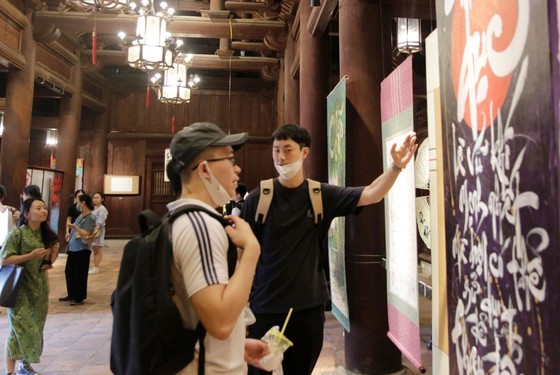 Graffiti is drawn in national monument of Van Mieu - Quoc Tu Giam
Young artists pursuing the practice of graffiti have gradually brought this street art into the solemn exhibition space, combining traditional art to honor the traditional culture of the nation.

In the early 2000s, Vietnamese streets began to appear with graffiti (or a painting on the wall) with spray-painted images that appear in public spaces. Because a part of young people has abused graffiti to draw in many public spaces in a liberal style, this type of art is more or less viewed from a negative perspective, bearing the reputation of graffiti.
Thanks to hidden deep in the distinct creative personality, street art, with serious practices, creating beauty for public space, has helped graffiti to exist in Vietnam, develop and weave through the streets and street corners.
Especially, for the first time, graffiti has been drawn in the exhibition called ‘Dialogue Calligraphy and Graffiti’, which will last until the end of September 2022 at a special national monument of Van Mieu - Quoc Tu Giam (Temple of Literature Complex), is one of the most popular relics and tourist destinations in Hanoi and the country at large. The exhibition was jointly organized by the Van Mieu–Quoc Tu Giam Culture and Science Center and the Vietnam National Institute of Culture and Arts Studies to hold cultural activities and exchanges in Quoc Tu Giam’s cultural space and provide information on Vietnamese history to the public.
Roughly 39 works with the elegant calligraphy art combined with the innovative spray paint of graffiti, but still artfully blended together on display surprised the audience. Most of the works on display in the exhibition are made by 9X graffiti artists and calligraphers.
Sharing about the combination of graffiti and traditional Vietnamese calligraphy art, 23-year-old calligraphy artist Vo Tuan Xuan Thanh from Ho Chi Minh City said that this is not just an exhibition, but also a meeting of artists who share their own perspectives. In his view of point, the success of the exhibition is to bring these two seemingly different art forms closer together – the coexistence of the traditional and modern qualities.
The exhibition "Accumulation - Time Stop" will last until the end of September 2022, at the NEO art entertainment complex at 393/7 Hai Ba Trung Street in Ho Chi Minh City’s District 3, displaying more than 20 works of nearly 20 graffiti artists in Vietnam. This event, as a general exhibition, is the first graffiti exhibition with a large gathering of graffiti artists from the North to the South.
Graffiti is an art that is written, painted, or drawn on a wall or other surface, usually without permission and within public view. Graffiti ranges from simple written words to elaborate wall paintings and has existed since ancient times.
Participating in the exhibition is an opportunity for graffiti to shine and be seen more fairly; however, many people fear that street art will lose its inherent liberal nature.
Graffiti artist Luu Doan Duy Linh shared that graffiti is exactly to mark the name of the painter on the street, to satisfy their creative ego. This time’s graffiti exhibition is also a way for people to have the opportunity to learn more about it, but the nature of graffiti still belongs to the street.
Street art always goes between praise and criticism, also because of the spontaneity and freedom that many people made use of paint on walls or public surfaces, worsening the urban aesthetic. However, many young graffiti artists with serious creative efforts have turned the walls of old apartments such as 1A, and 1B in Nguyen Dinh Chieu Street in District 1 to be adorned with fresh colors. Besides, in well-organized exhibition spaces, graffiti has gradually changed public prejudice.
Graffiti artist Luu Doan Duy Linh disclosed that there are currently not many professional graffiti artists because the community has not yet accepted it as an art form but simply considers it as painting on the street and still many people see it as carelessly-drawn paintings.
Worse, a part of young people takes advantage of graffiti to smear the surfaces of public works, instead of having to make a work of artistic and aesthetic value. Pursuit of professional graffiti will have many difficulties because painting with spray paint affects health, not to mention, that artists must climb on high walls to paint on large walls. That's why many people decided just to make graffiti in digital art.