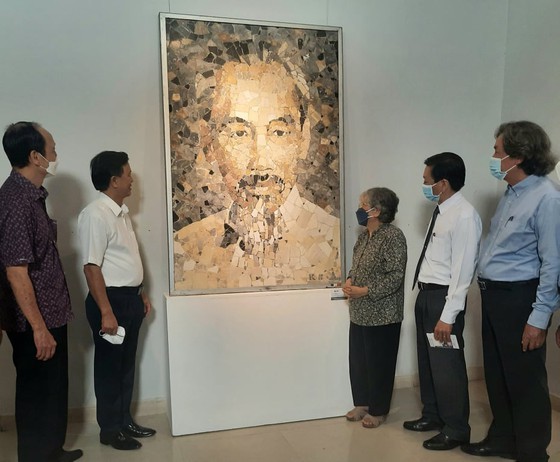 Speaking at the opening ceremony, Deputy Head of the Propaganda and Education Board of the City Party Committee Nguyen Tho Truyen highly appreciated the exhibits

He hoped that there will be more valuable works of art to promote the “Building Ho Chi Minh cultural space” which is one of the goals that have been launched in the 11th Ho Chi Minh City Party Congress for the term 2020-2025.

Deputy Head of the Propaganda and Education Board of the City Party Committee Nguyen Tho Truyen (R) offers flowers to painters at the display.
The “Building cultural environment and HCMC cultural space, promoting cultural identities of the city’s people” campaign has been affirmed at the 11th municipal Party Congress for term 2020-2025. The campaign aims to promote the value of historical and cultural heritages related to revolutionary activities of the patriotic young man Nguyen Tat Thanh. The planning and development of cultural facilities and annual cultural programs must be associated with the studying and following of Ho Chi Minh ideology, morality and style. The Ho Chi Minh culture will be promoted to penetrate deeply into the people’s life and is regarded as a special power of the city’s residents.