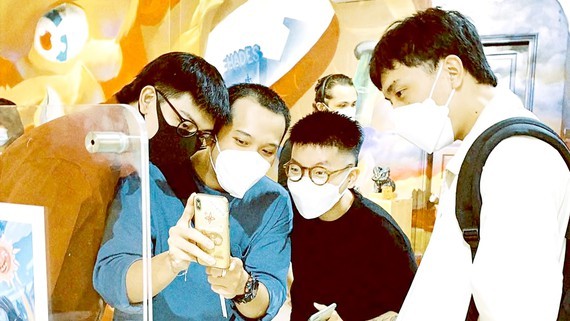 The Covid-19 pandemic is an external force promoting the digitization process in culture and art faster. Some fields, in which it seems that only the existence and physical exhibitions are suitable, such as sculpture or museums, in recent years, have also adopted technology to digitize strongly.

Not only scan QR codes to look up information about artifacts, but some museums have also digitized databases to establish virtual museums or smart museum applications. Southern Women's Museum is the first museum in Ho Chi Minh City to use Hologram machines in the exhibition space. Via the Hologram machine combined with 360-degree interactive software and virtual reality (VR) technology, visitors can see artifacts on a 3D projection floating in the air. The Vietnam Fine Arts Museum has also researched and launched the iMuseum VFA application - a multimedia application - to help users visit the museum remotely or directly.

Ms. Cao Thai Hoang Uyen, iMuseum Project Manager of the Vietnam Fine Arts Museum, shared that some major museums in the world had had multimedia applications a long time ago, and they had more favorable conditions on funding than domestic ones. The iMuseum VFA project team had tested more than 160 versions before developing a suitable one. Technology changes rapidly, so developers must constantly update the actual situation of the museum to bring an increasingly rich experience to the end-user. In addition, the application supports up to eight languages, so it was hard to find experts to perform translation and proofreading.

In the field of sculpture that seems to display physical works only, in recent years, young sculptors have increasingly focused on performance application and art videos or combining VR and augmented reality (AR). Sculptor Pham Dinh Tien, a lecturer of HCMC University of Fine Arts, said that there were many machines and software to support the physical shaping of sculptures. If artists want to be more innovative and creative, they must update their technology knowledge continuously. Sculptors now have to know more about programming to convey their message best, interact, and attract more viewers.

In the field of cinema, digitization is a much-discussed story, especially regarding the massive archives currently being preserved at the Film Institutes in Hanoi and HCMC. According to Mr. Nguyen Xuan Du, Deputy Director of the Vietnam Film Institute, this unit is storing and preserving the national film collection of more than 80,000 16mm and 35mm plastic films, nearly 20,000 movie titles, tens of thousands of video and digital films, and other types of motion picture materials in other technical formats, including many valuable works of Vietnamese revolutionary cinema. 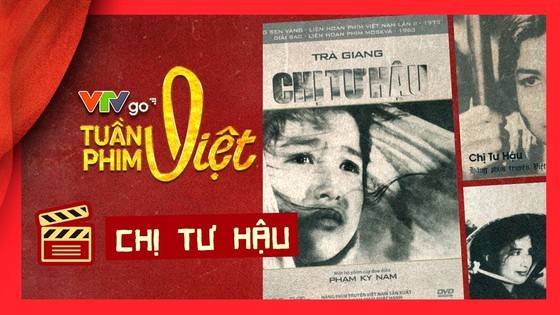 'Chi Tu Hau' (Ms. Tu Hau) one of classic Vietnamese films that have been digitized. (Photo: SGGP)
According to Mr. Le Tuan Anh, Deputy Head of the Technical Department of the Vietnam Film Institute, since the end of 2005, the institute has carried out the digitization process. Especially, since 2015, it has equipped a 2K film scanner system and has digitized about 4,000 films so far. However, constant technology change is one of the huge obstacles. With each technological change, the digitization work will have to start all over again. The cost and time required for copying the entire volume of data each time are not small. The challenge is to both acquire new technology and, at the same time, continue to maintain and preserve traditional plastic films. In fact, many precious documentaries have been seriously damaged and degraded.

Digitization not only creates favorable conditions for the preservation and storage methods but also prolongs the lifespan of cinematic works. More importantly, valuable, historically, and socially significant footage will have a more sustainable new life and vitality. It is also a premise for promoting and bringing classic works closer to the viewers, especially in the period in which online platforms flourish, as currently.

After digitization, many classic films of Vietnamese cinema were promoted in the event Vietnamese Film Week on VTV Go at the end of 2020. In late May this year, the Vietnamese Cartoons Week on VTV Go also introduced 50 films. Previously, the animation archive with hundreds of works of Vietnam Animation Studio was also posted on the YouTube channel "Phim hoat hinh Viet Nam” (Vietnamese Cartoons), which has attracted more than 560,000 subscribers and more than 160 million views so far. The Central Science and Documentary Film Studio also has a YouTube channel with dozens of featured documentaries posted. These two units also have fanpages for advertisement. Most recently, in mid-July, the Vietnam Film Institute also launched a YouTube channel and uploaded the first nine films, attracting millions of views.

In fact, after digitization, many movies, animations, documentaries, science films have been released on many social networking platforms, especially YouTube, but not all channels are genuine. Digitization faces difficulties, but post-digitization and copyright protection pose more and more challenges.

An outstanding issue in digitization is the issue of copyright. The Vietnam Film Institute launched a YouTube channel and posted nine films in mid-July. Controversies over whether this unit is allowed to publicize without the permission of the producer and the Department of Cinematography or not still have no satisfactory answers.