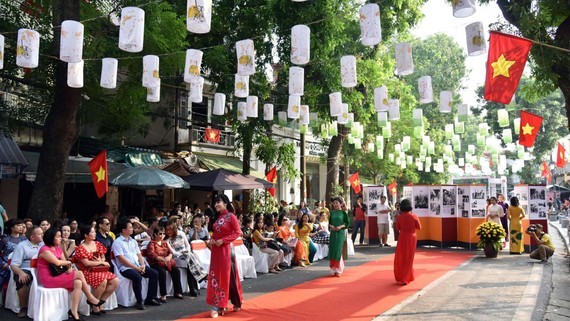 Phung Hung Pedestrian Street  in Hanoi - a good place n terms of cultural and creative culture
According to a representative of the Ministry of Culture, Sports and Tourism, cultural industries contributed 2.68 percent of gross domestic product (GDP) in 2015, this industry contributed about $ 8.081 billion in revenue, equivalent to 3.61 percent of GDP in 2018 after implementing the strategy to develop cultural industries. The industry has been providing employment for more than three million workers, accounting for 6.1 percent of the total employed people across the country.

The cultural industry has also created learning opportunities for many people, helping to narrow the gap in educational attainment between regions; thereby, contributing to the transformation of cultural heritages into a source of social cohesion, opening network, and exchange of information and resources in communities.
In addition, cultural heritage is still a rich and diverse source of input materials for many cultural industries such as cultural tourism, design, performing arts, music, games, electronics, and cinema; hence, helping to establish a competitive advantage, uniqueness, and brand identity for these industries in the regional and global markets.
Compared with other industries, the cost of reproduction in the cultural industry is low, but the growth rate is high, accounting for more than 7 percent of the world GDP; moreover, it steadily increases every year by an average of 10 percent. As a result, many countries in the world have promoted the development of the cultural industry and turned this industry into a spearhead economic sector.
However, according to lecturer Le Thi Cuc from the University of Culture, the cultural industry in Vietnam today is only in the early stages of development, both in theory and in practice. The public general perception of the value and role of the cultural industry is still limited.
Subsequently, although there are many potential advantages, the Southeast Asian country is still facing difficulties in achieving the cultural industry brand name and status of the Vietnamese cultural soft power in cultural industry products and services to the world. Many workshop participants pointed out that Vietnamese cultural products and services are basically of uneven quality, low applicability, and limitations are seen in the vivid expression of cultural identity.
This makes Vietnamese cultural products and services have not shown their competitiveness and attraction in domestic and international markets. Domestic cultural markets are being invaded by cultural industrial products from Korea, Japan, and China.
A research survey conducted by the Vietnam National Institute of Culture and Arts Studies (VICAS) has also shown that Korean culture has strongly penetrated Vietnam’s consumer market. Specifically, 67.4 percent of Vietnamese people watch Korean cinema accounting for the highest proportion and 56.2 percent of Vietnamese people listen to Korean music.
Ms. Nguyen Thi Thu Phuong, Director of VICAS said that the cultural industry is currently a weak link in the mechanism of transforming cultural soft resources into sustainable cultural products and services, and this is a big challenge that requires finding new solutions as soon as possible.
The culprit is the difficulty of the lack of capital, and investment models, the cultural-art industries in Vietnam still face significant gaps in the knowledge and skills needed for the operation of a business in the market mechanism. Forecast capacity, effectiveness, and efficiency of state management, training, and human resource management in the direction of enhancing adaptability to the cultural market are still limited while piracy is still popular.
Music producer and musician Quoc Trung said that for the development of a sustainable music industry, it is necessary to have an equal assessment, financial support, a legal framework, and especially a state sponsorship for good projects, whether of public or private entities. Meanwhile, Mr. Lam Tuan Anh of VICAS proposed to change the censorship mechanism from pre-inspection to post-audit, based on the view of maximum encouragement of the creativity of individuals.

By Mai An - Translated by Anh Quan