Earlier the event was scheduled to take place on September 29 (on the 13th day of the eighth month of the lunar calendar).

On August 8, the central coastal province of Binh Thuan announced to close entertainment facilities in the province to minimize COVID-19 exposure and reduce the risks of local transmission. Entertainment facilities, such as cinemas, karaoke bars, massage parlors, bars, nightclubs would be closed. In addition, gatherings of events, festival, religious rituals, fairs, meetings, weddings, funerals involving many persons would be prohibited. These enhanced measures will take effect from 0:00 hour on August 8 until further notice.
Last year’s festival attracted more than 2,800 students from 30 secondary and primary schools in the province. The event was held at Nguyen Tat Thanh Square where was lit up with thousands of colorful lanterns of both traditional and modern designs in various shapes and sizes, drew a large number of visitors. After the opening ceremony, there was a lantern parade running down main streets in the city, attracting thousands of students and visitors.
The mid-autumn lantern parade festival has been recognized as Vietnam’s largest lantern parade by the Vietnam Guinness Book of Records and granted the Guide Awards from the Vietnam Economic Times for “the most unique and most successful festivals of Vietnam’s tourism sector”. 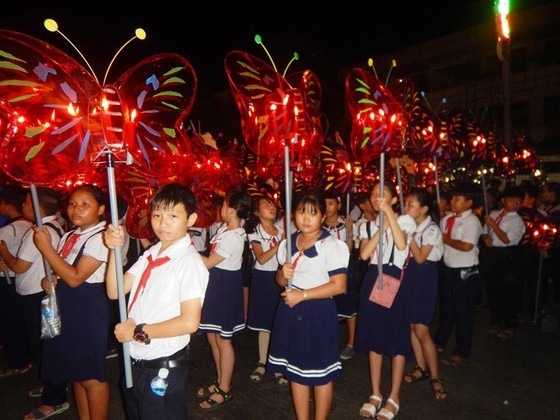 Last year’s festival attracts more than 2,800 students from 30 secondary and primary schools in the province.