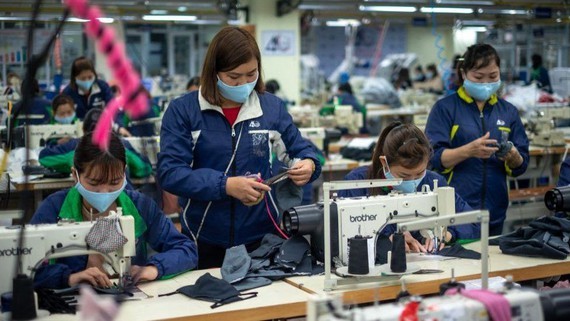 Illustrative photo
These are some facts that were stated in the report. However, it is to be seen in actuality what worrisome issues exactly lie behind such an optimistic picture.
Unreal indicators
Behind these impressive indicators is the development investment spending of VND 133,900 bn, which is only 28.1% of the annual budget estimate. Low development investment spending is the reason that the total state budget expenditure in six months is only 41.2% of the yearly estimate of VND 775,000 bn. In the first six months of the year, the pandemic situation still raged on in all regions, while the total revenue was equal to 57.7% of the yearly estimate. Revenue exceeded the estimate and spending on investment developed slowly, causing the budget surplus to reach VND 81,000 bn in the first six months of the year.
This is a paradox in that the economy desperately needs resources to promote growth and stimulate economic development. It shows even more urgency if placed in the context that the proportion for development investment spending accounts for only approximately 25% of the total budget expenditure. This proportion is already low, and disbursement and spending rates are slow, obviously not being able to best support economic development and create the foundation for development in coming years.
In the first few months of the year, development investment spending is often slower because ministries, branches, and localities are in the process of distributing and announcing investment capital plans to investors, and also due to the influence of the Tet Lunar New Year. However, by the end of the second quarter, the slow disbursement of investment capital for development is really worrisome.
According to calculations by Economica Vietnam, if development investment spending in the first six months of the year were on schedule as estimated, an additional VND 105,000 bn would have been injected into the economy and GDP of the first six months would not stop at 5.64%. Notably, this amount was injected into the economy without creating any impact on pressure on public finance or risks on fiscal policy. With this disbursed capital and the volume of works, necessary infrastructure of equivalent value has been formed, and may have been or will be put into use in the near future.
Obviously, before discussing stimulus packages or packages to support economic growth, it is necessary to take into account that it is accompanied by many potential risks in public finances. This requires reviewing available spaces and making the most effective use of them. Accelerating the progress of development investment spending is the clearest, most feasible, least risky space from the perspective of fiscal policy, to continue maintaining the economic growth rate in the last months of the year, and also creating a stronger foundation for economic development in coming years.
Change in mindset
During the first week of July, a support package of VND 26,000 bn was announced. This was a timely and necessary support package for affected workers, especially in the context that many localities have had to implement social distancing under Directive 16. In particular, the sharp increase in budget revenue and the amount not fully disbursed from the support package of VND 62,000 bn in 2020, poses a problem of continuing to deploy support packages for employees at a higher level, with a wider range of beneficiaries. Regardless of the size or number of support packages, reality calls for the most efficient use of this scarce resource, both socially and economically. There is a need for a change in mindset about support packages and how support packages are used.
The support packages not only help workers but also stimulate consumption and economic development, and indirectly support businesses to produce consumer goods and provide basic services for employees. With this dual benefit, ministries, sectors, and localities will be stronger in their decision to open their purses in order to raise the level of support and expand the beneficiaries of support, including employees with low income, or those who are receiving social protection. Here arises the question of how quickly or slowly the support money reaches the beneficiaries, depending on the disbursement mechanism and the preparation work of disbursing units.
In fact, with the current regulations, many localities, especially those facing many difficulties in budget balance, will have to complete several procedures to have money to spend for the group of free lance workers. Except for some localities that have been relatively well prepared, such as Ho Chi Minh City, completing the procedures to form a source of expenditure and make a list of beneficiaries will take a long time for many other localities.
Even if the procedures are simplified for businesses who lend, there is no one who will bear the risk of bad debts when lending to businesses that are laying off or temporarily suspending workers. From a banking perspective, businesses that are laying off workers are in the high credit risk group. There is no one taking on the liabilities for bad debt risks when disbursing funds to struggling businesses.
Reforms in administrative procedures for the disbursement of the VND 26,000 bn package are really worth noting. This is where the population database comes into play with added value of public services. This is also the time when banks and telecommunication carriers show social responsibility and step in to expand payments to beneficiaries via bank accounts, ATM accounts, mobile money, and expand financial and banking products for the poor in need.