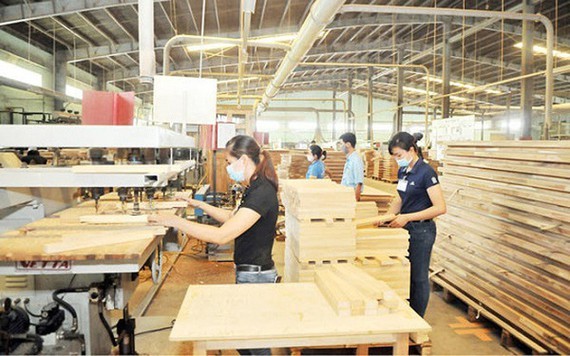 Illustrative photo
This number represents a ten-month increase, but it is actually an increase from residuals of last year.
Since the outbreak of the fourth wave of the Covid-19 pandemic, after reaching the peak of $1.5 bn in June and July, it was down to $1.3 bn through August, September, and October, dropping far below the level of $1 bn per month. This decline is seen in most of the top categories of items such as furniture, seats, and plywood. The decline in most key markets such as the US, South Korea, UK, and Canada is about 20 percent per month. The decline was almost uniform, from large-scale enterprises to craft villages and households. If November and December do not see a breakthrough, the target of $14 bn for the whole year will be hard to achieve.
For a long time, the production of wooden furniture, especially wooden products for export, have depended on imported wood sources. This situation is deepening because domestic wood sources are increasingly becoming rare now while using foreign wood is suitable and avoids being declassified on its origin. Since the Delta variant of the Covid-19 pandemic broke out again, the supply was immediately disrupted until recent months, affecting the production and timely delivery of the right quantity, mainly of logs and planks.
The most common practice for furniture manufacturing enterprises to respond in the current pandemic situation is to either shut down completely or operate moderately, maintaining 20 percent to 50 percent capacity as it is impossible to immediately reach 100 percent capacity. According to a mid-October study, many enterprises have cleaned up their workshops.
At the end of October, some enterprises restarted and their productivity reached 50 percent to 55 percent, by the end of November it reached 60 percent to 65 percent, by the end of December it was 70 percent to 75 percent, and this momentum is expected to stay until the end of January 2022. It is forecast that by the end of February 2022, productivity will reach over 80 percent.
Workers who have returned to their hometowns to avoid the pandemic will find it difficult to immediately return back to factories, while recruiting new workers who do not know their jobs will not be favorable in the restarting process. It is known that some enterprises have overcome this situation by overtime allowances and attractive incomes, but this can only be a temporary solution. Support from fiscal policies such tax payment extensions, loan interest rate reduction, and debt repayment term extensions can benefit only healthy businesses, while other businesses that have stopped production, and are not exporting and not subject to tax, will not be able to borrow.
Gasoline prices too increased suddenly on 10 November. This is the fifth sharp price increase since the beginning of September. Petrol is the input of most industries, production, and life itself, and sooner or later it affects the cost of goods, especially export of goods. Export prices cannot immediately increase in proportion to the increase of domestic costs. European and American customers can understand the situation but will still find it difficult to adjust. It is believed though, that most exporters have already adjusted their price upto early 2022.