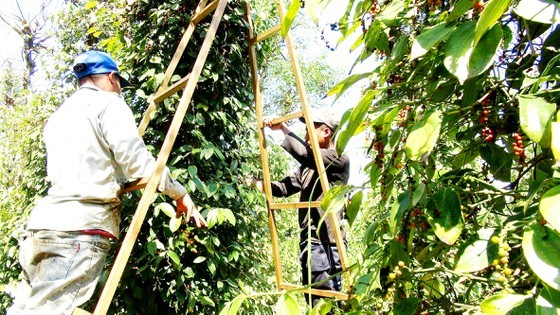 In the afternoon of February 15, a carrot harvest festival was held for the first time in Duc Chinh Commune of Cam Giang District in Hai Duong Province. This event was organized to promote the quality and brand of local produce and stimulate the domestic as well as international demands for this agricultural product in the upcoming time.

Hai Duong Province Department of Agriculture and Rural Development informed that there are 1,600ha of farmland alongside Thai Binh River and Kinh Thay River to grow carrot for an output of over 80,000 tonnes a year. The future seems quite promising for farmers in the province.

Seeing a contradict situation are dragon fruit growers in Long An Province. Lately, its Department of Industry and Trade has sent a document to ask local organizations, units, businesses to aid farmers in the consumption of nearly 20,000 tonnes of this produce.

Functional agencies of Long An Province are also trying to contact their counterparts in Binh Duong Province to seek other markets for dragon fruit to avoid too much dependence on the Chinese market. They are preparing a consumption plan for the next harvest, which happens this April.

Similarly, dragon fruit farmers in Cho Gao District of Tien Giang Province are collecting their out-of-season produce on their 7,400ha farmland. Although the yield is predicted to be around 60,000 tonnes, the sad news is wholesalers have stopped buying this fruit, so many farmers are struggling to sell their product in vain. The local authorities, therefore, are discussing feasible solutions and plans for long-term, more stable development for fruit crops here.

After Tet holiday is normally the harvest season for pepper in the Southeast region of Vietnam. Compared to last year’s selling price of VND45,000-50,000 (US$2-2.2) per kilo, the price this year is nearly double. Along with that is the favorable weather conditions, resulting in a yield rise of over 30 percent compared to this time last year.

Farmer Giang Van Phuc in Thien Hung Commune of Bu Dop District in Binh Phuoc Province happily shared that he and his fellows all feel eager selling the crops this year thanks to such a high price and produce output.

Unluckily, as the price of pepper in previous years was quite low while the weather did not favor this crop, most farmers in Ba Ria – Vung Tau Province did not wholeheartedly take care of the plant, leading to a yield decrease of 15-20 percent this year despite the higher price.

In related news, the Lang Son Province Department of Industry and Trade reported a temporary halt of produce truck heading to the province from February 16-25. Reports from the General Department of Vietnam Customs reveal that at 4pm yesterday, there were still around 2,900 produce trucks waiting to finish import-export procedure at the 4 border gates of Tan Thanh, Huu Nghi, Chi Ma, and Coc Nam. In the neighborhood of Dong Dang Station were 1,128 vehicles also waiting for customs clearance procedures.

Due to tightened control for Covid-19 prevention purposes from the China side of the border gates after Tet holiday, the speed of customs clearance has been rather slow, with only 60-100 trucks allowed to pass. However, the quantity of produce vehicles transporting fresh fruits (dragon fruit, watermelon, jackfruit, mango) heading to Lang Son Province reaches 160-180 trucks a day.

Therefore, the Lang Son Province Department of Industry and Trade proposed that export businesses actively regulate their own goods flow and stop sending trucks to the northern borders to reduce congestions here.