The information was stated by the Ministry of Industry and Trade and the Vietnam Trade Promotion Agency this morning. 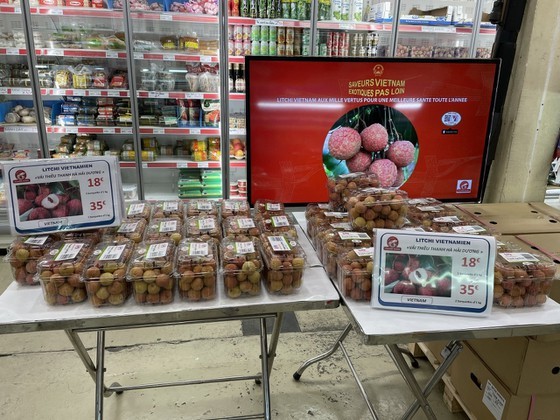 Thanh Ha  lychees are showcased at Asian-European supermarkets in Paris, France. (Photo: Vietnam Trade Promotion Agency )
This is the first batch of Thanh Ha lychee shipped to France via the aviation route.
After tasting the fresh lychees, many consumers are interested in the delicious and the sweet naturally in lychees and some people bought up to five kilograms of lychee.
With the great consumption, French importers decided to import the second batch with one ton of lychees to serve the market via aviation route.

Vietnamese lychees are sold at US$22 per kilogram in Paris. (Photo: Vietnam Trade Promotion Agency)