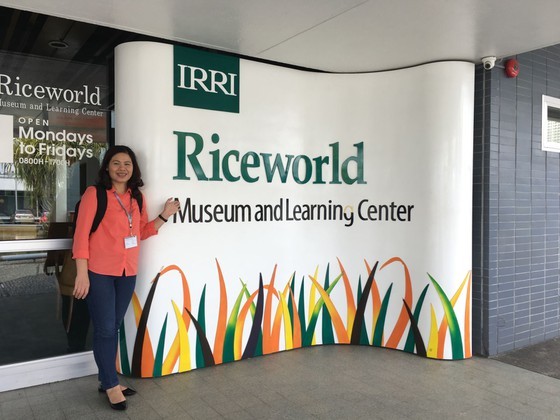 Dr. Vo Thi Minh Tuyen, one of the two Vietnamese scientists who receive awards of FAO and IAEA. (Photo: SGGP)
The press release informed that on the occasion of the 65th General Conference of the IAEA, FAO and IAEA recognized the contributions to plant mutation breeding from 28 researchers and research teams of institutions from across 20 countries, honoring them with awards for outstanding achievements.

Noticeably, two Vietnamese scientists have excellently entered the list of recipients of the FAO and IAEA awards this time, namely Dr. Vo Thi Minh Tuyen with Women in Plant Mutation Breeding Award and M.S. Nguyen Van Manh with Young Scientist Award. Both scientists are currently working at the Agricultural Genetics Institute of Vietnam.

FAO also said that within the framework of cooperation between IAEA and FAO, experts around the globe are receiving assistance in using nuclear techniques in agriculture, including irradiating seeds or other plant material to develop plant varieties with characteristics, such as drought tolerance or increased yields.

Besides, experts in the region can now share best practices via the Plant Mutation Breeding Network for Asia and the Pacific, recently set up by the Joint FAO/IAEA Center of Nuclear Techniques in Food and Agriculture, which offers technical support based on the needs of each country.

Speaking at the ceremony, FAO Director-General Qu Dongyu said that "with the technical support provided by the Joint FAO/IAEA Center, plant breeders in many countries have achieved substantial improvement through mutation breeding in a wide range of crops."

According to him, creating new varieties towards sustainable and nutritious agriculture is also the theme of this year's "World Food Day" on October 16.