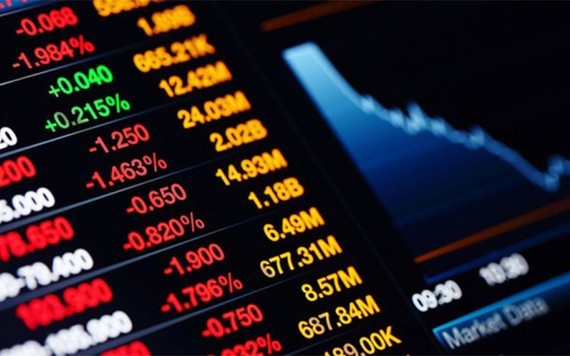 The sell-off session was triggered by the August inflation report. Instead of cooling down thanks to decreasing gasoline prices, the US August's inflation index edged up by 0.1 percent compared to July. According to analysts, the figures show inflation has spread to the entire economy. This is a signal that inflation will last longer and be more difficult to deal with than anticipated.

The red color from the US stock market had a negative impact on the global stock market, including Vietnam. Stockholders panicked and sold out at all costs as soon as the market opened. The supply pressure was so large that the VN-Index was flooded in red, while gainers only appeared sparsely on the electricity board.

However, at the last minutes of the session, bottom-fishing demand suddenly appeared to help the VN-Index curb the losing momentum. At the end of the session, the benchmark only sank 7.63 points, or 0.61 percent, to 1,240.77 points. Of the index, there were 321 losers, 120 gainers, and 86 unchanged stocks.

Amid the panic of investors, the group of stocks in the VN30 basket was also under selling pressure, causing most of them to close down. Specifically, there were 24 decliners out of 30 stocks, including almost all large-cap stocks, such as MSN, GAS, VNM, VIC, SAB, PLX, VHM, VJC, TCB, HDB, CTG, FPT, BVH, MWG, and VCB.

Meanwhile, only two stocks in the VN30 basket kept the green color at the end of the trading session, namely SSI and VRE. Four stocks that stood still were HPG, NVL, POW, and STB.

The bottom-fishing cash flow in the afternoon helped the market liquidity improve, with nearly 608 million shares matched, equivalent to a total trading value of VND14.35 trillion. Of which, the VN30 contributed VND4.25 trillion.

Meanwhile, the HNX-Index retreated 2.17 points, and the UPCoM-Index slid 0.23 points.