New F0 investors
On 16 April, Prime Minister Pham Minh Chinh was speaking at a Government meeting where he asked ministries and other relevant sectors to closely monitor and take appropriate measures against potential risks to the economy, such as signs of a hot increase in the stock market or an unusual increase in land prices in some localities.
Immediately after the Prime Minister's speech, the stock market fell sharply before the wave of investors could sell off. After this session, the stock market moved sideways for most of April. At the closing session of the Standing Committee of the National Assembly on 16 June, Chairman Vuong Dinh Hue warned of a possible bubble occurring in the stock market. This warning by the Chairman of the National Assembly caused the stock market to quickly react.
However, when the fourth wave of the Covid-19 pandemic suddenly broke out between end of April and early May, a wave of new investors, also known as F0 investors, sprung up to invade the stock market. According to newly released data from Vietnam Securities Depository (VSD), the number of new accounts opened by domestic investors in May jumped to 113,674 accounts, the highest in the history of the stock market. Previously, the record in March showed 113,314 domestic accounts. In the first five months of the year, domestic investors opened 480,490 new securities accounts, exceeding 20% of the number of new accounts opened in the whole of 2020, which recorded 393,659 accounts.
The appearance of F0 investors is said to be one of the reasons why the HoSE trading system often falls into overload due to a large amount of money pouring in. According to analysts, the pandemic which has compelled the implementation of social distancing has made the stock market the most attractive investment channel currently, because people staying at home can indulge in this activity online without having to go directly to the stock exchange, same as a few years ago. In particular, the stock market is not picky about its customers, but only needs a few tens of millions of dong to be traded.
Risk warning
When foreign investors were still in a state of net selling, F0 investors were the new wind that fueled the VN Index rise. This index continually touched historical points of 1,300 and even 1,400 points. The stock market's hot rise in recent times has made the price-to-earnings index (P/E) now upto 19.1x, equivalent to the P/E of 2017 and 2018.
Recently, Mr. Pham Hong Son, Vice Chairman of the State Securities Commission (SSC), warned that with the current market size and margin lending ratio, securities companies (SSCs) need to be very careful. According to regulations, securities companies are not allowed to use a margin of more than two times of their equity, so many securities companies have reached their threshold and plan to increase capital. Securities companies need to be careful during this period because it affects first of all the businesses themselves and then the investors.
Using margin is like playing a double-edged sword, when the market is up it is fine, when it is down, it will cause turmoil. When margin reaches the threshold and is expected to continue to increase, the State Securities Commission will strengthen inspection and supervision measures to ensure that the margin lending is legal, safe for securities companies, and sustainable for cash flow in the market.
According to Mr. Son, the stock market is not separate, but accompanies the general development of the economy, with the Government's drastic measures in handling the pandemic. The higher rate of vaccination will help the stock market prospects this year and growth next year. However, the stock market always has two advantages and risks, so investors need to be very careful. On the side of state management agencies, in the last six months of the year, the State Securities Commission will implement drastic measures to protect securities companies, investors, and the whole market in general. In the current context of pandemic fluctuation, although it is well under control, we still need to be careful to keep the market operating sustainably.
Market corrects itself 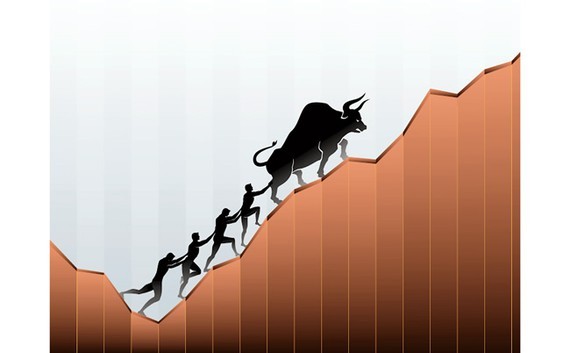 How to control the hot upward trend of the stock market was a topic discussed by many members of the stock market at an online seminar on the stock market on 30 June. At this seminar, many financial experts said that if the stock market goes up too high, it will correct itself. According to Mr. Pham Vu Thang Long, a representative of the Ho Chi Minh City Securities Company (HSC), the P/E of the stock market is at a high level but still low compared to other countries in the region. For example, South Korea is currently 21.1x, and Thailand is 29.5x, even if P/E decreases based on third and fourth quarter business results.

Meanwhile, the third quarter will be more difficult for the macro-economy because of the high base level starting from the third quarter of last year. When the macro bottom in the second quarter of last year was accompanied by the impact of the Covid-19 pandemic with the increasing scale of infections, many provinces and cities had to implement strict social distancing measures, so the outlook will be difficult in the third quarter. It is hoped that the fourth quarter will see reopening of international routes, which will then support the economy, especially the services sector.
Mr. To Giang Nam, a fund representative at the Fund Management Company Limited in Vietnam Joint Stock Commercial Bank for Industry and Trade (VietinBank Capital), said that the stock market has a lot to do with cash flow, and the margin cash flow in securities companies has doubled equity, so the addition of margin capital will slow down. In addition, the Covid-19 pandemic in coming time will be gradually controlled with expanded vaccination drives. Some countries will loosen the social distancing regulations and a number of industries in Vietnam will return to work, so money will return to production and businesses.
In the long term, when the market approaches the upgrade route, foreign cash flow will return, and after an adjustment there will be more sustainable growth in the near future. However, Mr. Nam believes that in some sectors and groups of stocks, the hot increase has exceeded the expected value, so in the short term, there will be a stock adjustment in terms of real value.
According to a securities expert, instead of trying to curb growth, the regulator should strongly help the stock market become more transparent, minimize violations in information disclosure, insider trading, or stock price. In the context that the stock market is dependent on new F0 investors, protecting them through cleaning up the stock market is the most vital activity right now.