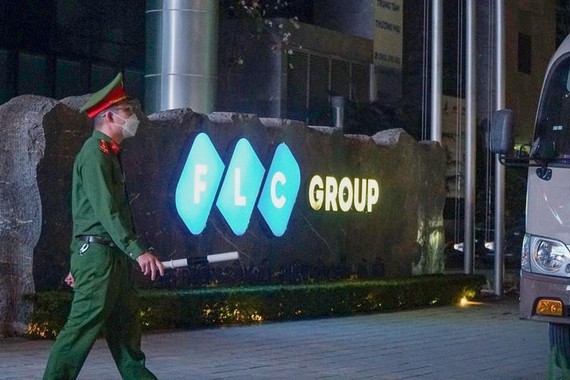 Illustrative photo.
However, even though there have been hundreds of such cases of administrative fraud for manipulating stock prices in the past, this is the first time a case like this has been reported as a criminal offence. From one perspective, this will create losses for some investors, but in general it will benefit the stock market to move towards a better and more cautious direction.
Dubious dealings
Trinh Van Quyet's arrest for manipulating stock prices was welcomed by the market in general because such activities were proving to be a long standing pain for a majority of investors. They believe that the administrative penalty is too light for serious offences such as stock price manipulation, and do little to appease the losses suffered by so many investors. The FLC Group has long been notoriously known for its price volatility, as was the case with ROS stock. There was a time when this stock increased nearly twenty times in just one and a half years since listing. A stock that used to have a market value of hundreds of thousands of dong, and in the next one year falls to a few thousand dongs, is rather inexplicable.

It is to be seen if the stock market reacts negatively to the news of Trinh Van Quyet's arrest. If the answer is in the affirmative, then it means it will directly and indirectly affect many stocks. However, if the answer is negative then it simply means that the affected stocks are not representative of the market.
Immediately after the controversial ban was imposed on Trinh Van Quyet on 29 March, stocks in the FLC Group, namely, ROS, HAI, KLF, ART, and AMD dropped and continued to be sold at floor price, although they were difficult to liquidate. By the time the arrest information was announced on 30 March, this group of stocks officially lost liquidity, with very few buyers, while thousands of billion dong worth of shares were sold out by investors. The spill over effect from this incident led to a decrease in a series of other highly speculative real estate stocks. This was the direct negative effect of this arrest and many speculators now have a high chance of losing all their money.
However, the FLC Group stocks only have 5 or 7 codes, and the stocks that are highly speculative are only a few dozen codes. This is only a small part of the thousands of shares being traded on exchanges. While speculative stocks dropped at the same time, there were hundreds of other stocks that fluctuated very little, even increasing prices normally. For the real investors, this crisis of losses and sell-offs is happening somewhere far away and is only being reported on TV, hence they feel unaffected by it.
An important follow-up question remains as to why speculative stocks sold off, and the most likely answer is the positive vibration from the arrest. Speculative activities, which cause prices to appear only for the majority of investors, just cannot be proved because of lack of evidence. Therefore, the criminal handling of this stock price manipulation case of Trinh Van Quyet is just a shrill alarm bell, and soon the road will become clear again.
Market reacts
The arrest of Trinh Van Quyet is not the first case that the stock market has had to face. On 21 August 2012, the market reacted negatively to the arrest of Nguyen Duc Kien which was directly related to ACB shares. On 21 October 2014, Ha Van Tham was arrested and was directly related to OGC shares. On 1 August 2017, the arrest of Tram Be was related to stocks of STB. On 29 November 2018, the arrest of Tran Bac Ha was related to stocks of BID.
It's not hard to see that the impact of these arrests on stock prices and the market as a whole only stumbles slightly and not many people remember the incident afterwards. The related stocks and the general market still move forward for one very simple reason that cannot be equated with a collective. Without Tran Bac Ha, BIDV would still be a good bank. Without Nguyen Duc Kien, ACB would still grow. Therefore, Trinh Van Quyet will also be just a name for investors in a few years, as an example of fraud.
Since the new investors increased massively in the stock market in the last two years, the trend of short-term speculation and snapping has exploded. There is a speculative cash flow towards good stocks that increase in price, even though these are stocks of companies with losses, even those losing consistently for many years to the point that they are delisted. Massive liquidity in the market is a good thing, but it is not good if this abundant cash flow upsets the normal value of the stock market.
On the other hand, setting a precedent of a first criminal case for manipulation of stock prices will serve as a warning sign for speculators. There will be no administrative fines included in the price costs as before. The stock market needs shocks of the right magnitude to remind it that one of the lifelines of the economy needs to have smart investment cash flow as the key, not a scam cash flow method.