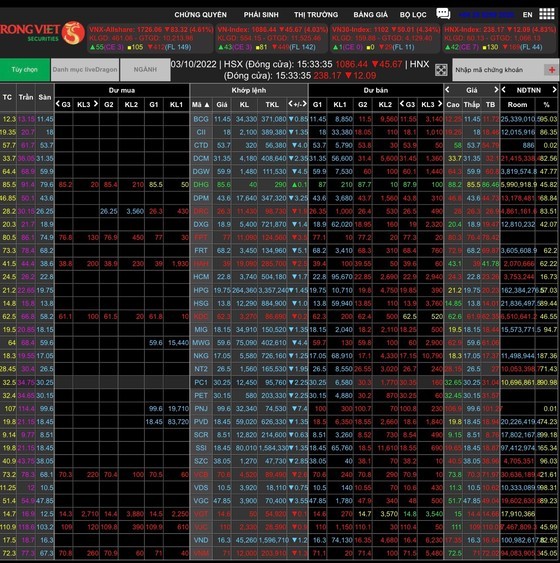 Nearly 200 stocks hit the floor on October 3. (Photo: SGGP)
After a spectacular reversal of the VN-Index in the last trading session of September 2022, the Vietnamese stock market made a non-stop drop in the first trading session of October. On the two official trading floors, nearly 200 stocks fell to the floor, causing the VN-Index to officially lose the 1,110-point mark, retreating to the bottom made in February 2021.

In the context that the global stock market continued to break the bottom, the sentiment of domestic investors was pessimistic, so the VN-Index opened the trading session with a sharp decrease. Demand dropped drastically because bottom-fishing investors continued to lose money last week, so the purchasing power also plunged sharply. Investors were afraid of risk, so they just stood outside to observe. Hence, the indexes continuously plummeted because there was no support.

The indicators continued to plunge in the afternoon trading session. Near the end of the afternoon trading session, the panicky sentiment of investors caused the selling pressure to increase sharply, causing various stock groups to hit the floor. Of these, there were several banking and securities stocks, such as MBB, LPB, STB, CTG, TCB, SSI, HCM, VCI, SHS, and VND, that dragged down the VN-Index by nearly 52 points sometimes. Net selling of foreign investors was more than VND500 billion on the Ho Chi Minh Stock Exchange.

Liquidity continued to decline sharply by 20 percent compared to the previous trading session, as the total trading value was only VND11.58 trillion.