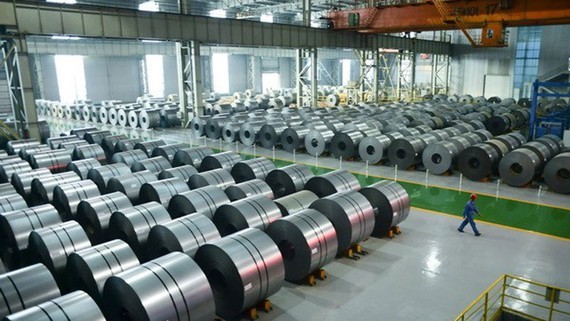 Illustrative image
In a statement to the State Securities Commission of Vietnam (SSC), the Hoa Phat Group (HPG) said that its revenue reached VND35.4 trillion (US$1.54 billion) in the second quarter, resulting in profit after tax of over VND9.7 trillion.

In the first half of this year, Hoa Phat reported revenue of nearly VND66.9 trillion, up 67 percent year-on-year. Its profit after tax was more than VND16.7 trillion, three times higher than the same period last year.

The significant growth was driven by higher steel prices.

Due to disruptions amid Covid-19 outbreaks around the world, prices of materials for steel productions like coke and iron ore jumped, causing steel prices to surge.

On the Shanghai Futures Exchange, the price for October delivery of rebar was 5,737 yuan per ton on July 30, up 32 percent since the beginning of 2021.

According to Vietnam Steel Association (VSA), construction steel prices rose nearly 9.3 percent for the year to VND16,500 per kg in July, which was up 50 percent over the same period last year.

“The negative effects of the Covid-19 pandemic on the economy have boosted the Government to carry out great fiscal stimulus measures, helping the recovery of demand for construction materials since the second half of 2020 until the first half of 2021,” Viet Capital Securities JSC (VCSC) said in its report.

In the first half of this year, “construction steel consumption and total sales of galvanized steel and steel pipes grew by 14 percent and 36 percent respectively over last year,” the company added.

During the period, the company’s sales expenses rose sharply to over VND31.4 billion from just over VND8.1 billion of the second quarter in 2020.

However, the steel producer still set a record net profit of nearly VND196.7 billion, while it had lost over VND15.4 billion in the same period last year.

In the first six months of 2021, its net revenue reached nearly VND2.4 trillion, up 21 percent year-on-year. This led to profit after tax of VND316.8 billion, compared to a loss of VND11.7 billion last year.

Similarly, Vietnam Steel Corporation (TVN) posted net revenue of VND10.9 trillion in the second quarter, up 35.7 percent over the year. The gain in revenue was over rises in cost of goods sold, so its gross profit climbed 128 percent to VND886.6 billion.

After deducting expenses, the company’s profit after tax was VND576.3 billion, 2.6 times higher than the second quarter of 2020. This is also the highest quarterly profit since Vietnam Steel was founded.

As of June 30, the company’s net revenue increased 32.5 percent to VND20.37 trillion, resulting in profit after tax of VND970.5 billion, 3.8 times higher than that of last year.

It reported net revenue of VND33 trillion and profit after tax of over VND3.37 trillion in the first six months of the year.

Gross profit expected to fall in rest of 2021

In the second half of 2021, VCSC believes that as China begins to taper economic stimulus, it will restrain the gain in global steel prices.

And even though high steel prices provide significant benefits for steel producers in the short term, it also creates economic pressure on many downstream industries including construction, machinery manufacturing, real estate and public investment.

This situation will lead to a decrease in steel demand and will eventually rebalance the market.

The report noted that the difference between the price of hot rolled coil (HRC) and finished products of galvanized steel companies was much thinner than the difference between iron ore and construction steel. This will increase the risk of lower margins as low-cost inventory runs out and input costs catch up with product prices or product prices fall.

VCSC's scenarios suggest that the profit margin of steel producers will drop in the second half of 2021 from the high in the first six months of the year, mainly due to raw material prices rising and selling prices across the supply chain will adjust in 2022.

In addition, the rally of steel prices is expected to slow down in the rest of 2021, resulting in a reversal of gross profit.