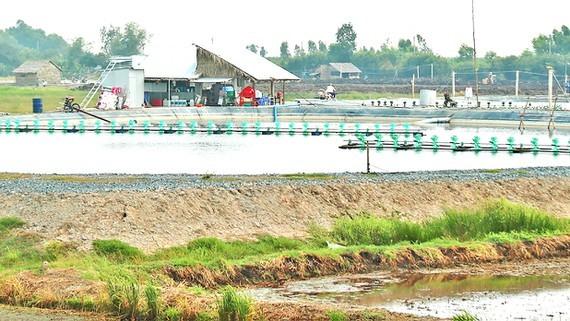 Farmers in Tan Hung border district raise white-leg shrimps in freshwater areas. (Photo: SGGP)
This poses a lot of risks in agricultural production because the osmosis of saltwater from the pond to the outside environment affects the production of rice and other crops.

In the border district of Tan Hung, when the price of pangasius fingerlings was at a high level, farmers hurriedly dug ponds to raise fish, sometimes the farming area was up to 1,700 hectares. However, after a short time, the price of fingerlings fell drastically, many households suffered losses, so they filled in their ponds to grow rice and vegetables, or arbitrarily switch to white-leg shrimp farming in freshwater areas.

According to statistics, in five districts of Long An Province, namely Tan Hung, Moc Hoa, Tan Thanh, Thanh Hoa, and Kien Tuong, 122 households are raising white-leg shrimp with an area of 215 hectares. Mr. Nguyen Van Thuan, a farmer in Tan Lap Commune in Moc Hoa District, said that if the price of white-leg shrimps is about VND140,000 per kilogram, then farmers need to invest about VND500 million on an area of more than one hectare, after three months, excluding expenses, farmers profit VND300 million-VND400 million, many times higher than rice farming.

Because farmers raise shrimps in freshwater areas, they all drill shallow wells with a depth of 30-40 meters to get water with a salinity level from 4 per mille to 9 per mille or use salt to increase the salinity level (20 tons per 1,000 square meters) for shrimp ponds. Most households raise juvenile shrimps with high density, ranging from 100 to 300 shrimps per square meter. According to Mr. Le Thanh Yen, Vice Chairman of the People's Committee of Tan Hung District, through a survey of the functional sector, at first, white-leg shrimp farming was quite smooth with most of the farming households earning quite high profits. However, this action is spontaneous among local farmers, the local authorities do not allow drilling wells to get saltwater for shrimp farming which causes damages to the environment. Local authorities have asked farmers not to dig new ponds or switch from pangasius fish farming to white-leg shrimp farming in freshwater areas. “For households who intend to change the function of pangasius fingerling ponds into ponds for shrimp farming, the locality will resolutely stop them. As for households who had sneakily raised shrimps in the past time, the locality will review and force farmers to commit that after harvesting, they will shut down their ponds. The locality will cut off the electricity to prevent them from continuing shrimp farming,” Mr. Le Thanh Yen affirmed.

According to the Department of Agriculture and Rural Development of Long An Province, raising white-leg shrimps in freshwater areas is not suitable for the biological characteristics and harmonious natural development of the region. This will cause immediate, as well as long-term negative impacts on groundwater due to overexploitation, causing water shortage in the dry season and land subsidence. Therefore, the department has proposed to the provincial People's Committee to continue to prevent white-leg shrimp farming in freshwater areas or using salt, and drilling wells for saltwater to create the brackish-water environment for shrimp farming.