However, this region is showing signs of neglect and decline in recent times. In a talk with Saigon Investment, Dr. NGUYEN DINH CUNG, former Director of the Central Institute for Economic Management, shared his view on this issue.

JOURNALIST: - Sir, there are many opinions that the Southern Economic Region is facing many bottlenecks, which are limiting its ability to accelerate in growth, such as a deteriorating infrastructure, overload of urban transport, and increasing environmental pollution. What is your opinion on this state of decline and related issues?

Dr. NGUYEN DINH CUNG: - First of all, in terms of a region, frankly speaking, it is just an accumulation of neighboring localities, with no significant links. All regional activities are just superficial. The localities have no motivation, and no need to coordinate and connect into becoming a strong economic zone.

In brief, Ho Chi Minh City and other provinces in the Southern Economic Region have not yet created organic links to become a unified entity. They have not created links with other regions and localities as well, so it is not possible to take advantage of regional relations to create a development momentum for the whole region. For example, Ho Chi Minh City is next to two major industrial and manufacturing centers, Binh Duong and Dong Nai, but the leading service industry of Ho Chi Minh City is real estate, while logistics services in Binh Duong and Dong Nai are their highlight. 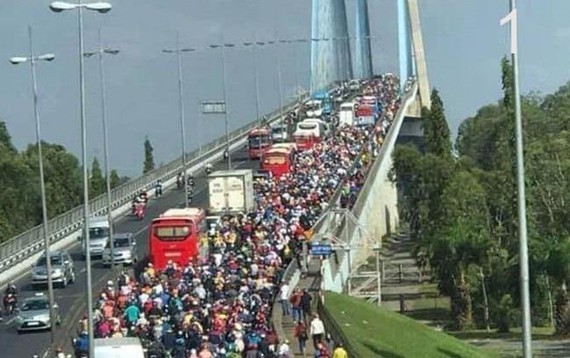 The gateway routes connecting Ho Chi Minh City with neighboring areas in the East and the South West are always severely congested.
- Sir, besides the need to complete twelve socio-economic targets of the region first, what are the other reasons?

- The root cause is that the retained budget ratios of the provinces in this region, including Ho Chi Minh City, are still very low, much lower than those in the North with the same economic scale. Regional budget revenues account for 40% of the national budget revenue, but only 20% of budget expenditure. The industrial provinces around Ho Chi Minh City such as Binh Duong and Dong Nai can only retain 36% and 47% of the budget revenue, respectively. The industrial provinces around Hanoi such as Vinh Phuc, Bac Ninh, and Hai Duong can retain budget at 53%, 83%, and 98%, respectively. Ho Chi Minh City alone is the highest budget contributor, but the retained rate is the lowest in the country, at only 18%.

Consequently, Ho Chi Minh City and the Southeast region lack resources to invest in and re-invest in upgrading the internal transport infrastructure and associated transport systems. The gateway routes connecting Ho Chi Minh City with neighboring areas in the East and the South West are always severely congested, making production, services and export costs too high, thereby reducing competitiveness and attractiveness for investors.

If we look at the results of Foreign Direct Investment (FDI) in Ho Chi Minh City, we will see that the scale of FDI projects in the area is getting smaller and smaller. Specifically, the average size of one FDI project in the Southern Economic Region is about USD 10 mn, significantly lower than the national average of USD 12.42 mn, while the average scale of one project in Ho Chi Minh City is even lower, only USD 5.56 mn. This means that Ho Chi Minh City is gradually lacking projects of large-scale, high-tech and modern corporate governance that are capable of leading development growth.

- Sir, according to you, how can localities in the region closely link and support each other in the most effective way?

- I must emphasize that there are fierce challenges facing the Southern region which require multi-sectoral and multi-local solutions that can only be resolved when localities build links and solve problems together. In order to do that, besides building a quality regional plan, it is necessary to let localities see practical benefits from joint activities and support each other. This means localities must have enough resources to solve their internal pressing problems, as well as participate in regional projects.

In my opinion, the first focus should be on traffic connectivity. If we let the provinces settle for themselves, it will be very difficult and take a very long time. This is where it is necessary to use public investment from the central government, and effectively stimulate development.

Besides, the governments of the provinces and cities must have a global view, so that each locality can bring into full play its own quintessential strengths. For example, Ho Chi Minh City should focus on high-tech projects, high value-added services, and should avoid more labor-intensive projects and production, because it will further stress the situation of infrastructure overload, while the value added is too small.

- Thank you very much.