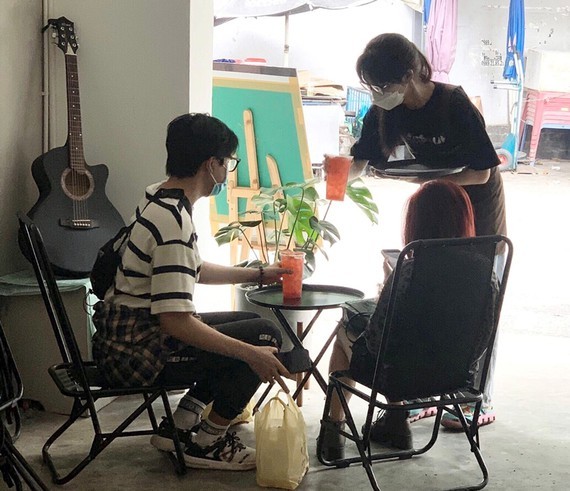 Restaurants in HCMC struggle to find staff
Across the city, restaurants are hurting for workers; therefore, recruitment notice of service staff, sales staff, assistant workers outside restaurants and business establishments are easily seen on many roads in Ho Chi Minh City. Most restaurants are recruiting employees to work in shifts, part-time as per hour, or fixed wages ranging from VND 4 million - VND6 million.
Mr. Nguyen Van Hai, the owner of a rice eatery in No Trang Long Street near the Oncology Hospital in Binh Thanh District, said that he has posted a notice board looking for laborers working in shifts since the beginning of October with a good salary and free lunch; however, almost a month has gone by with no one coming to apply. He disclosed more than 90 percent of the eatery staff have not yet returned to Ho Chi Minh City.
Currently, it is very difficult to recruit employees to work in shifts and part-time jobs, most unskilled workers have returned to their hometowns, and students from schools have not yet come back to schools. He is quite worried because he cannot find waiters and waitresses.
Dang Xuan Son, the owner of Son rice restaurant at 17 Giai Phong Street in Tan Binh District wanted to resume dine-in service after pandemic restrictions were lifted. He hung a job posting looking for an assistant and he discovered that it was extremely hard to find employees to fill those empty slots.
Until now, he still could not find an appropriate staff. The old employees of the restaurant went back to their hometown and decided not to return to the city, so he had to find a new helper to start selling on the spot.
Although the shop has offered lunch packages, accommodation support, bonus money on holidays, and Tet for employees, no one wanted to work, said Mr. Son.
Similarly, Milano coffee shop in alley 908 Nguyen Kiem Street in Go Vap District announced to recruit female waitresses who will work in shifts. According to the owner, although he has posted a recruitment notice for the past few days, no one has contacted him for the job.
Not only shops and restaurants have been struggling to find waiters, dishwashers, cooks, but many other industries are also short of unskilled workers such as bricklayers, painters, maids, babysitters.
Ms. Vo Thi Yen, living in Vinhome apartment building in Binh Thanh District, said: “Over the past week, I have been looking for a domestic worker by the hour, with a salary of more than VND40,000 an hour, but I have not found anyone yet.”
According to preliminary statistics of related agencies, the impact of the Covid-19 pandemic has caused hundreds of thousands of freelance workers to lose their jobs, become unemployed, and they left the city for their hometowns to avoid the epidemic. When Ho Chi Minh City started the "new normal" phase, many establishments and business establishments in the area had a serious shortage of part-time and seasonal workers.
Many eatery owners agreed to offer high pays and free meals and accommodation, but it is still difficult to find satisfied staff. Some restaurant and business owners in Ho Chi Minh City said that hiring temporary and part-time employees at the moment is very difficult because most freelance workers have not returned to the city owning to difficulties in transportation.
Moreover, freelancers are also worried about the lack of temporary accommodation.
In addition, some employees tend to change jobs to hope to stabilize soon, especially during the approaching Lunar New Year. In addition, freelancers and seasonal workers hardly enjoy benefits and regimes such as social insurance contributions, bonuses on holidays, and Tet, so it is difficult to attract workers to return.
Ms. Vo Thi Tien in Luy Ban Bich Street in Tan Phu District who used to be a waitress at a pub on Au Co Street, said that after the epidemic was under control, the pub had not yet been allowed to open; so she decided to seek a new job to settle down soon.
“Currently, I have applied for a job in a garment factory in Binh Tan District. I will go to work early next week,” Ms. Tien said.
For nearly a month, the Ho Chi Minh City Youth Employment Service Center has received recruitment requirements from business establishments in the area to recruit unskilled workers with high and attractive salaries.
Some companies need full-time laborers or laborers working in shifts, the salary ranges from VND15,000-VND25,000 an hour or even VND30,000 an hour. However, a few returnees to the southern metropolis can’t satisfy enterprises’ production demand. Therefore, the authorities need to have a plan to coordinate with businesses and recruitment units and have appropriate remuneration policies to attract the workforce back.
According to Mr. Pham Thanh Truc, deputy head of the management board of Ho Chi Minh City's export processing and industrial zone (HEPZA), around 210,000 workers have returned to work until now and approximately 95 percent of businesses have resumed their manufacturing activities. Thereby, factories and enterprises have not increased their full capacity. Nevertheless, many enterprises are gradually expanding production scale while more workers have come back to the southern largest city.