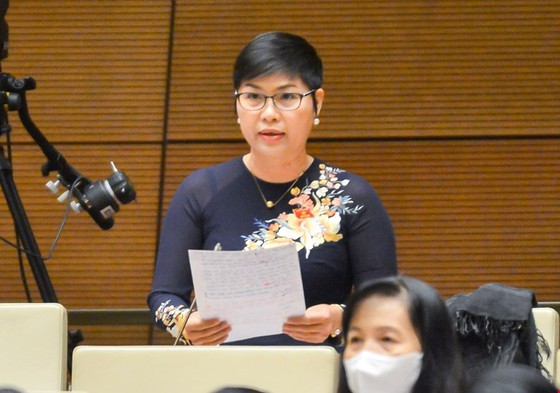 Delegate Do Thi Thu Hang is delvering her speech

The fourth outbreak of Covid-19 in Vietnam has brought about severe effects on different social classes and created unprecedented challenges to all aspects of life, especially to economy and healthcare. The Southern key economic region, including Ho Chi Minh City and the provinces of Dong Nai, Long An, Binh Duong, has faced the greatest trial ever due to disruptions in logistics and operation.

Statistics reveal that in the first 9 months of the year, HCMC’s GRDP decreased by 4.98 percent and the total retail sales dropped by 17.4 percent compared to this time last year.

Similarly, in Dong Nai Province, the total retail sales and service revenues only witnessed a slight rise of 2.91 percent – the lowest in many years. Its domestic investment attraction merely reached 52 percent of this time last year, and nearly 900 businesses had to temporarily or permanently close.

In Binh Duong Province, the total retail sales and service revenues only saw a minor growth of 1.9 percent. Its industrial production index merely increased by 2.9 percent compared to this time last year, with 435 enterprises permanently closing or reducing their capital.

Besides the avoidable fact that the three above regions are not able to meet the GRDP increase target of 2021, they are facing a severe human resources shortage since millions of laborers came back to their hometown.

Therefore, among the decisions for socio-economic recovery in Vietnam to be made this time, Delegate Hang suggested that the Government and the National Assembly consider increasing the national budget allocation to the three mentioned regions since with their industrial parks, they have normally made great contribution to the national economy and state budget (accounting for 45 percent annually).

One of the major missions of HCMC and the provinces of Binh Duong, Dong Nai is to urgently build reasonable accommodation for low-income workers during the period from 2021-2030 so as to welcome laborers nationwide to address the human resources shortage issue. Obviously, this plan needs huge financial amount.

It is expected that this budget rise will provide sufficient financial support for the two provinces and HCMC to invest in infrastructure, especially traffic and healthcare ones, to improve their competitiveness, social security, resilience against pandemics, as well as proactively responding to other negative impacts. This, in turn, will boost the growth of the whole Southern key economic region.