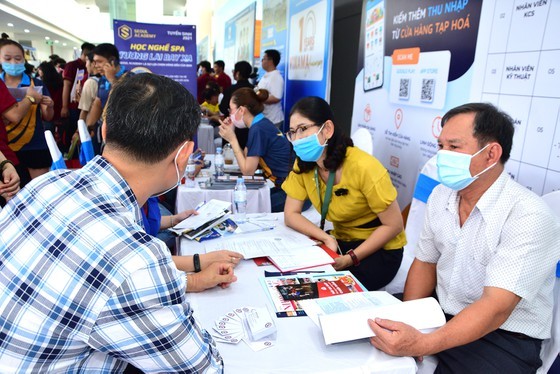 Job seekers and recruiters at a job fair
For more than a week, Ms. Hoang Thu Hien living in Ho Chi Minh City’s District 12 often surfed social networking sites and recruitment sites to look for jobs. Unemployed during the outbreak of the fourth wave of Covid-19, she has been struggling to cover usual household expenses.
Hien shared that the low availability of unskilled jobs in the rural hometown has made her decide to settle down in Ho Chi Minh City although her friends insisted that she should stay in the hometown. Currently, she is having an appointment for an interview at the beginning of next week at a garment company.
Unlike Ms. Hien, worker Tran The V. in the Central Highlands Province of Dak Nong has just returned to the southern metropolis to find a new job after returning to the hometown nearly a month. He explained that because of frustration caused by the impacts of the social distancing mandates, he went back to his hometown with a group of friends.
Now that the epidemic in HCMC is put under control and he has received a dose of the Covid-19 vaccine, so he decided to return to the southern largest city. These days, he has found some good jobs at employment service centers.
Employment service centers have been witnessing a boom in recruitment demand . At the Ho Chi Minh City Youth Employment Service Center, more than 200 businesses announced that they need to take on more than 50,000 employees.
Additionally, the center’s ten branches in many districts in HCMC including four facilities in Mien Dong (the eastern) bus station, Mien Tay (the western) bus station, An Suong bus station, and Nga Tu Ga bus station to facilitate job seekers who are from all corners of the country to the city.
According to the Ho Chi Minh City Department of Labor, Invalids and Social Affairs, around 151,000 laborers have returned to the city after HCMC lifted some Covid restrictions earlier this month. Thereby, the number of workers at more than 1,400 businesses including trade - services, tourism, transportation, food processing which have been resuming their operation has raised to 215,000.
From now on to the end of 2021, the southern largest city is forecast to need about 60,000 workers and in early 2022, it needs additional 120,000 workers for production and business activities at the end of the year and the beginning of the year.
According to an employment survey, many businesses and business establishments in the city have also started to advertise to hire workers. Most have offered high salaries and benefits according to the Labor Code. In addition to fixed-term employment, a plentiful demand for seasonal, part-time, and rotating jobs is available.
Tran Van Thanh , HR manager of Hoang An Garment and Printing Company in Binh Chanh District said that the company currently lacks a lot of employees in the garment and printing sectors and skilled printing technicians. He disclosed that the company has advertised to hire workers with a salary of VND8-14 million a month, but so far not many workers were hired for ensuring a stable operation of the chain.
Similarly, over the past 2 weeks, Parapex Company in Vinh Loc Industrial Park in Binh Tan District has been also crying for the recruitment of garment workers. In addition to receiving a high salary, employees are also entitled to benefits such as social insurance contributions, Tet bonus, and annual leaves. Many other businesses are also recruiting employees with high pays averaging VND7- VND7. 15 million a month.
According to Ms. Nguyen Thi Thanh Thao, Head of Employment Services Department of the (Ho Chi Minh City Youth Employment Service Center, the market is also seeing a large recruitment demand from now until the end of 2021. An unskilled laborer will get a pay of approximately VND4.5- VND6 million a month while a skilled technician will be paid about VND10-VND15 million monthly.
Presently, the Ho Chi Minh City Youth Employment Service Center has been conducting a survey in industrial parks and export processing zones to grasp the recruitment trend, including that of private companies. Many businesses have a great recruitment demand and the center is ready to connect and introduce jobs to employees, Thao added.
Currently, Ho Chi Minh City has 127 employment service establishments that are promoting the connection between employees and companies. The Ho Chi Minh City Employment Service Center and the Ho Chi Minh City Youth Employment Service Center will continuously open job fairs to connect workers with businesses.
According to the HCMC Department of Labor, Invalids and Social Affairs, the recruitment demand will increase from November, plenty of businesses will start to expand their activities to serve the market at the end of the year. However, textile and footwear companies, mechanics, refrigeration, information technology, sales, forwarding, business - commerce, service, mechanical - automation, transportation, and warehousing are struggling to find workers.
Le Minh Tan, director of the HCMC Department of Labor, War Invalids, and Social Affairs, yesterday said that to ensure social security for workers, Ho Chi Minh City is promoting welfare support for people in difficult circumstances. People with permanent and temporary residence certificates are entitled to social welfare. By the afternoon of October 20, more than 5.2 million people had received support for the third phase. Ho Chi Minh City will continue providing support till October 22.